* The ticket prices quoted above are for those tickets bought prior to matchday. Tickets bought on the day of the game can cost up to £3 more per Adult ticket and £2 more per Senior Citizen/Child ticket. 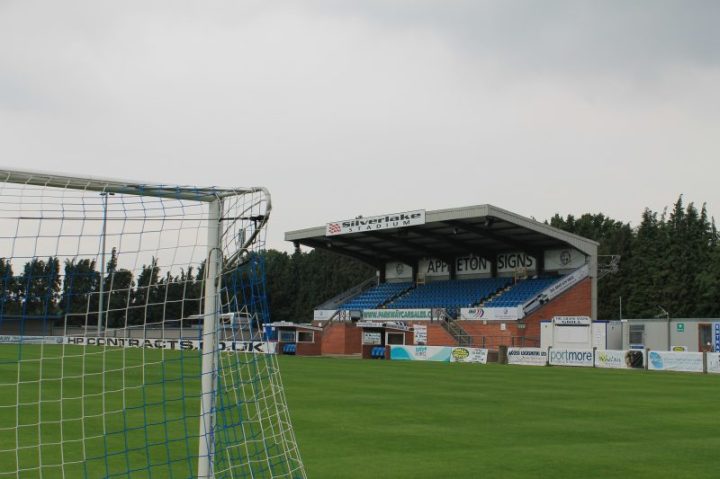 Silverlake Stadium has undergone some major changes in recent years, with the erecting of new stands and other developments on three sides of the stadium. Although two of these stands, on the East side and South End may be of a semi-permanent nature in construction, they have very much improved the overall look of the ground, as beforehand these areas were largely open to the elements.

On the West Side of the stadium is the Main Stand. During 2017 this stand which originally was a small, raised covered seated stand that sat astride the halfway line, has been extended down towards the Mackoy Community (South) Stand, more or less trebling its original size, having a capacity of 1,170 covered seats. Comprising of mostly eight rows of seats, the seating areas are raised above pitch level, meaning that supporters need to climb a small staircase to reach them. The stand is also cantilevered, meaning that there are no supporting pillars, so supporters can enjoy unobstructed views of the playing action. The stand also incorporates a small press box/area for the stadium announcer. On the other side of the Main Stand towards the Clubhouse End is an open flat standing area. The team dugouts are located in front of this stand.

On the East side is a covered terrace that was purchased from Exeter Chiefs Rugby Club and transported to the Silverlake Stadium in 2014. Although only a few steps high, it is covered and has a capacity of 1,250. On the roof of the terrace above the halfway line, there is a television gantry. A more substantial covered all seated stand has been built at the South End. The Mackoy Community Stand has a capacity of 2,290. At the opposite Clubhouse End, a new tall club building has been built behind a small terrace, which overlooks the ground and terrace below. Looking somewhat out of place at a football ground and not the most attractive of buildings, it is used to how the club offices and has facilities for corporate clients. It has a high roof that has been extended out from the Club building over the terrace. The terrace runs for around a third of the width of the pitch and is located directly behind the goal. Although it does have some supporting pillars along its front it is an improvement on what was originally an open area. In the North East corner of the stadium, there is a fair sized electronic scoreboard. The stadium has a set of four modern floodlights.

The ground was originally known as Ten Acres but was renamed the Silverlake Stadium in a corporate sponsorship deal.

There is a club bar at the ground called the Hangar, which welcomes both home and away supporters. The entrance to the Hangar is located outside the stadium and the bar closes 15 minutes before kick off. It reopens at half time and after the match has ended but for home supporters only.

Just North of the Silverlake Stadium on Stoneham Lane is the Concorde Club, which has a public bar. It also serves real ale. Half a mile further on is the Cricketers on Chestnut Avenue. It serves food and has real ale from Greene King. However, although it is in walking distance there are no footpaths along the road in the immediate vicinity of the stadium, so it would be advisable to drive.

If you have a bit of time on your hands and you are traveling by train, then you could alight at Eastleigh Railway Station, which is close to the town centre where there are plenty of pubs to be found. In fact just across the road from the railway station is a Wetherspoons outlet called the Wagon Works. From Eastleigh Bus Station you can catch the BlueStar No.2 service towards Southampton City Centre, which passes near to the stadium. Visit the BlueStar website for timetables.

Leave the M27 at Junction 5 and take the Stoneham Lane exit towards Eastleigh. You will pass the back of the stadium on your left. Continue to the end of the road and at the roundabout go completely around the roundabout to come back on yourself, back towards the motorway. Just as you pass the Concorde Club on your left turn right into Stoneham Lane. The entrance to the ground is around the bend on the left. However, the Club close this north part of Stoneham Lane from 12.30pm for Saturday kicks offs and 5pm for evening kick offs. An alternative route is as follows:

Leave the M27 at Junction 5 and take the A335 towards Swaythling and Southampton. At the next set of traffic lights turn right onto Bassett Green Road and then take the second right onto Stoneham Lane. The Club entrance is located half a mile up this lane on the right.

Car Parking
There is a good sized car park at the ground which holds 600 cars, however only 125 are these are available on a first come first served basis at a cost of £5 per car (free for Blue Badge holders). You could possibly park at Southampton Airport Parkway Station at a cost of £5 on Saturdays and take the 20 minute walk to the ground.