Remember when paintballing was all the rage back in the nineties? That moved quickly from being an outdoor pursuit to an indoor one and with the advent of tech, all manner of indoor adventures have become available and not just for rainy days.

What Is An Escape Room?

The concept of escape rooms began with first-person adventure video games where players interacted with their surroundings by clicking on-screen objects. Video games like Myst and Crimson Room allowed players to control their environment with just a mouse and a few simple commands. Certain elements of these point-and-click adventure games–interacting with hidden elements in your surroundings, solving puzzles, goal-oriented plotlines–became key features in what later became known as “escape rooms.”

The first documented escape room was created by a Japanese company called SCRAP in 2007. Players were ushered into a themed room where in order to escape, they had to solve a series of puzzles and riddles in a set period of time. Before long, escape rooms became popular, permanent fixtures in Japan and spread to China and the rest of Asia. Around this time, the first escape room in Europe opened in Hungary. Throughout the next five years, more and more permanent escape rooms populated Europe and Asia.

Beating an escape room requires teamwork, speed, creativity, and patience. Escape rooms are perfect for family vacations, corporate team-building, or just having fun with your friends. Escape rooms are amazing experiences to share with people, as you work together to discover clues to get out of an escape room, crack puzzles, and accomplish your ultimate goal (solving an escape room). Even if you don’t actually get out of the room, the whole team will have a blast and make memories that you will share for a long time. It’s great to bring a large group to an escape game, but you can also have a wonderful time by yourself! You can be put in any escape game location with strangers who will quickly become teammates. Some people even make friends for life with strangers in escape rooms!

You’ll wish you could stop the clocks

What makes the best escape games so popular? Escape rooms are a whole new way of experiencing storytelling. By combining a social activity with interactive adventures and challenging puzzles, escape game players are immersed in an entirely different world with storylines that feel like Hollywood blockbusters. No wonder they’re so addicting.

HOW TO DO AN ESCAPE ROOM?

Each escape game room has its own unique mission. You get to choose your own adventure by selecting the mission you want to challenge yourself to complete. Maybe you are trying to steal a piece of priceless art from a museum, or planning an escape from prison, or trying to repair a spaceship on Mars. Once you step into the escape room, you will be instantly transported into a different world, as your surroundings match the theme of your mission. Perhaps you find yourself standing in a fancy art gallery, or behind bars in your very own prison cell, or at the command module of a spaceship complete with high-tech screens and controls. These immersive worlds help you feel like you’re actually living out the story of your mission. Once you step into the escape game room, your Game Guide, the escape room staff member who will help you throughout the game, will make sure that you are clear on what is an escape room, the rules and answer any initial questions you have. Then, you will watch a video that explains your mission in full. Once the video ends, your one hour timer starts counting down! From then on, you’ll be directly interacting with the objects and props in the room to uncover all the clues to get out of an escape room you can find.

ARE YOU REALLY LOCKED IN AN ESCAPE ROOM? 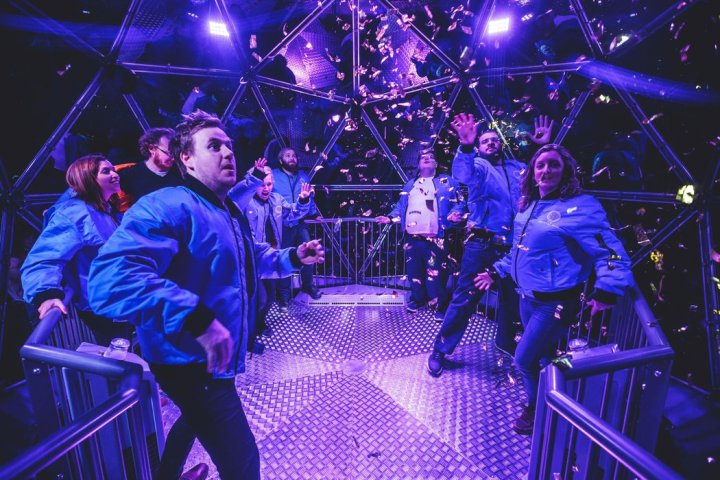 It’s the moment of truth – grab those tickets

We know what you’re thinking because we get asked this all the time: Are you really locked in a room? If you need to leave the room at any point during the game, you’re always welcome to step out. What happens if you don’t escape in time? If you don’t escape in time, that’s okay! Whether you complete your mission in time or not, your Game Guide will meet you at the end of the game and open the room if you haven’t escaped yet. While it is exciting to be able to successfully escape, escape rooms are still lots of fun for groups who don’t manage to make it out during their first attempt–it gives them a goal to work towards the next time they come and play!

WHAT MAKES THE ESCAPE GAME THE BEST?

There are now close to five thousand escape rooms worldwide! You can play an escape room in such far-flung places as England, Thailand, and Korea. While the proliferation of escape rooms makes finding one near you very easy, not all escape rooms are made equally. Escape rooms differ in overall quality and presentation.

Calling The Shots gives you a top ten of UK escape rooms – er, personally I’m happy to stick with Cluedo!

1. The Crystal Maze, London and Manchester

If there’s one thing Crystal Maze has, it’s a lot of fans. Which explains why you can now play the show for real in two UK locations: split into four teams per 90 minute session, eight people per team enter a sprawling space complete with large air-blasted crystal dome, darting between those four zones – Aztec, Industrial, Future, Medieval, in case you’ve forgotten – as a zany host guides them from challenge to challenge. Choose your team carefully though, as there’s a real mix of physical and mental tasks. Heads up: you will look as stupid as the contestants did on telly, but you will also want to do it all over again immediately after.

Designed to merge the gap between real-life and virtual reality, this is an interactive live puzzle game like nothing else before it. Walk down the narrow hallways and choose your mission wisely: save the US President’s son in Mission 60; stick to the classic format with Jail Break; or go all out in Treasure Hunter, which allows you to ape the antics of Sean Connery in Entrapment. ‘Scheriously’ good fun.

Escaperoomscardiff.co.uk
Why does a faulty TV remote always work when you smack it? How does Adam Sandler still get work? Don’t worry, this isn’t one of the conundrums you’ll be faced with at Cardiff’s Escape Rooms, we’re just curious. But you’ll have some serious head scratching to do here nonetheless. The most popular challenge is The Tomb: search for a missing person inside the booby-trapped tomb of Tutankhamun, trying not to set off the booby traps as the walls come down around you.

Through secret tunnels and the sort, London’s underground has a rich history with makeshift intelligence operations, and you can experience some first-hand at Mission Breakout, an escape room set inside South Kentish Town Underground station, which closed in 1924. Channel your inner Alan Turing with the Codebreakers mission, soaking up the authentic detail as you do so (the staff don costumes of the period). Built for one team from 3 to 6 players, you have 60 minutes to find clues, manipulate machines and plot your escape.

“Disney nor Universal Studios could pack this much fun into 60 minutes”. Not our words. Rather those of one happy customer who went along to this North London escape room. Using briefcases and other objects to crack the case, teams of three to five players are dropped into a room they can’t escape until they’ve solved the puzzles and saved the modern world from a villain intent on destruction. it’s as immersive as any spy game you’ll have played. Highly inventive, highly recommended.

To come out victorious at these North East escape rooms you’ll need to employ observation, communication and physical flexibility. It may also help if you’re a bit of a nerd: Dungeon, a middle ages-based enigma, pits two warring factions against one another, while Magic Castle, involves a good deal more wizardry and wonder. Both well worth the admission fee.

Fan of the Saw series? You’ll be wanting to try Escape Live’s Room 13 challenge, where you’re tasked with saving a hapless female victim from a blood-splattered cell by piecing together clues and objects in the hope of getting a four digit code to release the door. Or, if old fashioned sleuthing is more your thing, opt for Dr Wilson’s Office: it’s a Sherlockian case where players find themselves in a race against time, raiding a seasoned detective’s office for clues as his life hangs in the balance. Elementary? Anything but.

Claiming to have the hardest escape rooms in the UK, Manchester’s Lucardo is the place to really test your brain matter under pressure. The most popular challenge here is Virginia House, concerning a serial killer who’s on the loose and has been sending police clues. With the seconds ticking down and the stakes high, keep your wits about you and you may survive intact.

Another venue sure to separate the sharpest minds from the slowest, Tick Tock Unlock is one of the best reviewed escape rooms in the business. And business is good: there are five games to choose from but who would look past Mineforce: The Rebellion: a VR-powered science-fiction experience that incorporates real live theatre and 4D. James Cameron would approve.

An escape room with a difference – namely, there is no room – Espionage Missions bring logic puzzles, high-tech tasks and code breaking into the urban environment, making you feel a bit like Jason Bourne. And who can argue with that? Lasting between two and four hours, the missions are tracked online so each of the teams can map their progress with a scoreboard. An added real world edge is all well and good but the real highlight is seeing the true competitive streak emerge among friends.