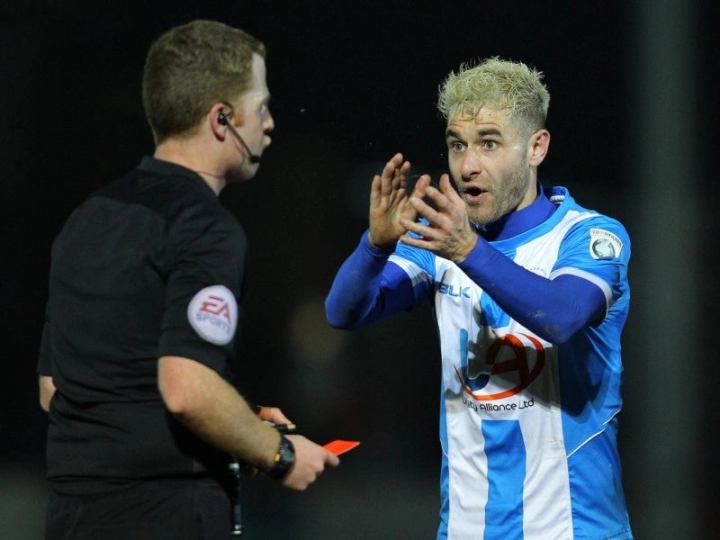 Well… it was. It was the WORST refereeing I have ever seen and I, like many others, have been going to football for forty years and spent a fortune doing so.

At last night’s Vanarama National League fixture between Aldershot Town and Bromley it was so bad that it almost caused a riot and might have done at a larger venue.

It all concerned the man in the middle, Mr. Richard Hulme. 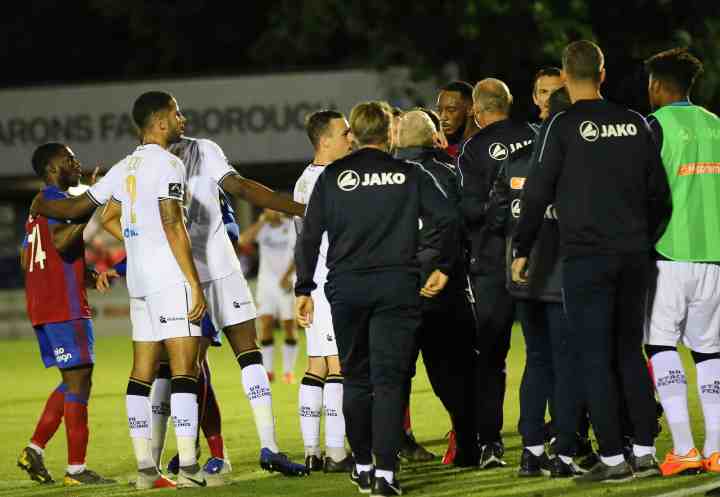 During the entire 90 minutes, Aldershot players were not allowed to challenge for possession, the referee gave almost every decision in Bromley’s favour and if there were one available, I’d love to see a stat of free kicks and who they were awarded to.

The throw-in fracas when Tinkler was repeatedly admonished and made to retake it from a variety of positions resulted in a Bromley throw-in and Fowler booked for having the nerve to ask just what the hell was going on.

The Aldershot manager was later sent to the stands too. I was in the south lower and the tension was getting out of hand and let me tell you, when you are in your fifties and old enough to know better, the fact that you were that close to running on the pitch to remonstrate with the ‘official’ speaks volumes. 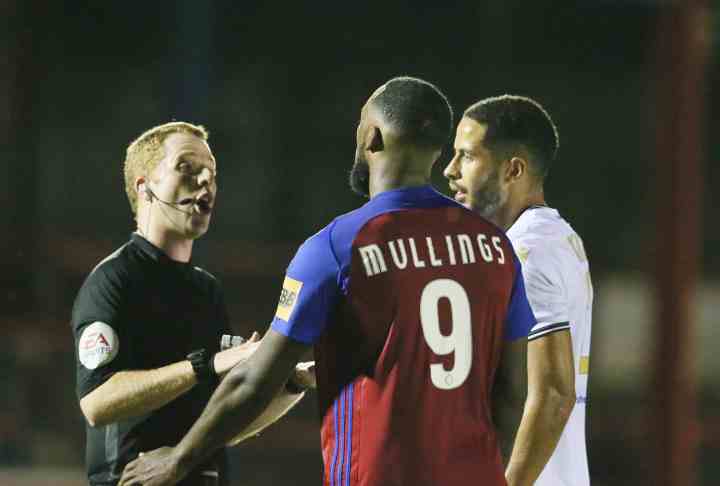 On Twitter after the game I read calls for petitions and claims that this referee, Richard Hulme, should not referee again. I agree and something ought to be done about his conduct during the Aldershot Town v Bromley fixture.

When things like this happen, nothing does happen about it because people go up in arms at the time but soon forget about it and move on. Result? The officials get away with it and worse still, it will happen again.

Well I’m making an official complaint to the referee’s association this very day and if anyone would like to comment on this it would be appreciated (comments can be left below).

Of course being in the fifth tier of football it will not be headline news and on your back pages.

Now I have done my homework and unearthed a fair few Hulme situations where he has caused controversy before and riled managers.

And I’ve ascertained that Hulme is a grade 2B referee, though I admit I have no knowledge of how these rankings work. I do see that the majority of Hulme’s officiating has been third tier and below.

Firstly, HE HAS BEEN HERE BEFORE.

There was an emphatic appeal for a penalty when Lewis Kinsella was clipped by a Havant player on the edge of the penalty box, yet referee Richard Hulme refused the claim and continued play.

Shots won that day and seemingly Hulme was unable to do anything about it.

“It was an absolute blatant penalty’

“It’s just a disgraceful decision. I don’t want to say too much but three of their players, including the number five who took him out, came to me after the game and said it was a penalty.

There was an early penalty shout for the O’s, Josh Koroma skilfully worked his way into the box and went down under challenge from AFC Fylde captain Neill Byrne, however referee Richard Hulme was not interested and waved play on. Head coach Justin Edinburgh slammed the performance of referee Richard Hulme and insisted had his side been awarded a penalty it would have changed the game.

It looked a case of six of one and half a dozen of the other but when Deverdics got to his feet after the collision, Mr Hulme produced a red card.

Richard Hulme blew his whistle and Bromley got the game underway in front of a sell-out crowd. The visitors set up to frustrate Justin Edinburgh’s side, and for the opening moments controlled the game as Orient failed to settle into proceedings. Bromley’s defence deployed bullying tactics, as Jack Holland and Roger Johnson were often penalised for being too tight to forwards Bonne and Koroma. Orient struggled to create in the final third, consequently the crowd grew in frustration, feeling the referee was being too lenient on Bromley’s defence

Bromley eh? To me there is a pattern here of bias towards one team or another. Hard to prove, granted but many of us will have watched games live or on TV where that appears to be the case.

If it IS going on, it should be stopped. In my opinion. If you share my opinion, please COMMENT below and give us some feedback.

I want answers as to why this referee did what he did last night and I want him to understand just what his actions cause to the majority of the unsuspecting audience.

I say that because you suspect and expect a fair and decent standard of refereeing at football games. To call that performance disproportionate would be generous – it was a disgrace and one that I never wish to witness again.