A Lewis Montrose header halved the deficit 11 minutes into the second half but the hosts’ search for an equaliser was made more difficult by midfielder Ryan Croasdale’s dismissal with 15 minutes to play.

Jake Hyde restored the Cards’ two-goal cushion from close range with seven minutes remaining, before wrapping up their fourth win in five games three minutes later from the penalty spot.

Sam Deering struck twice as Barnet fought back from two goals down to claim a 2-2 home draw with Chesterfield.

Substitute Deering levelled matters in bizarre fashion in the third minute of added time when his attempted cross eluded Spirites’ goalkeeper Tommy Lee and nestled in the bottom corner.

Chesterfield took the lead in the 21st minute when Dean Smalley was on hand to tap in after Craig Davies’ effort had been well-saved by Barnet goalkeeper Sam Walker.

Substitute Tommy Wright scored a late winner as Sutton continued their unbeaten start to the National League season with a narrow win over Boreham Wood at Meadow Park.

The two sides came into the game sitting just one place and one point away from each other in the standings, and a hard-fought stalemate looked likely until Wright struck eight minutes from time.

Sutton midfielder Craig Eastmond came closest to a breakthrough in the first half but the former Arsenal man was twice denied by David Gregory and saw a header cleared off the line.

At the other end, Tyrone Marsh had an early effort saved by Jamie Butler as Boreham Wood sought to build on their opening win of the season against Dagenham & Redbridge last weekend.

Gregory was back in the action on the hour mark to deny Robert Milsom before his team-mate Tom Bolarinwa saw a shot deflected wide.

Sutton, now up to sixth and one of just three unbeaten teams in the division, continued to push and were rewarded in the 82nd minute when Wright, having only recently replaced Omar Bugiel, fired the ball past Gregory. 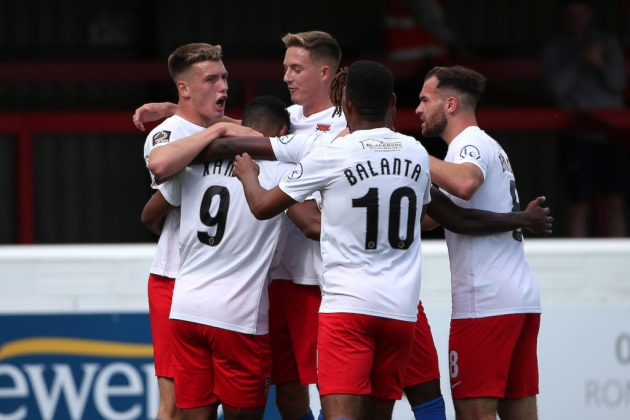 Dagenham & Redbridge bounced back to winning ways in thNational League with a 4-2 victory over Harrogate Town.

A brace from Angelo Balanta and goals from Chike Kandi and Mitch Brundle sealed three points for the Daggers to move them outside of the bottom four and up to mid-table at Victoria Road.

Manager Peter Taylor made five changes to the starting line-up from Tuesday night’s 3-0 defeat to Boreham Wood with Will Wright, Will Wood, Harry Phipps, Alexander McQueen and Chike Kandi coming in.

Andrew Eleftheriou and Bagasan Graham miss out while Matt Robinson, James Dobson and Joe Quigley were dropped to the bench.

In the 14th minute Daggers levelled the score as attacker Kandi slotted the ball into the bottom right corner after being played in behind the backline by McQueen.

Harrogate restored their lead in the 24th minute as Brendan Kiernan fired a shot home after cutting into the box from the right flank following a long ball up the pitch that was knocked on by Mark Beck.

Daggers went close four minutes later as Spaniard Luque won a race for the ball and fired an effort goal bound but Belshaw got his right foot to it.

A minute later they did level things for the second time as former Dover Athletic man Brundle headed a Luque corner into the net at the near post.

Balanta fired into the top right corner to make it 3-2 to the hosts in the 60th minute after a fairly even opening 15 minutes to the second-half.

Former QPR youngster Balanta then grabbed his second of the match in the 85th minute as he headed home at the far post to make it 4-2. 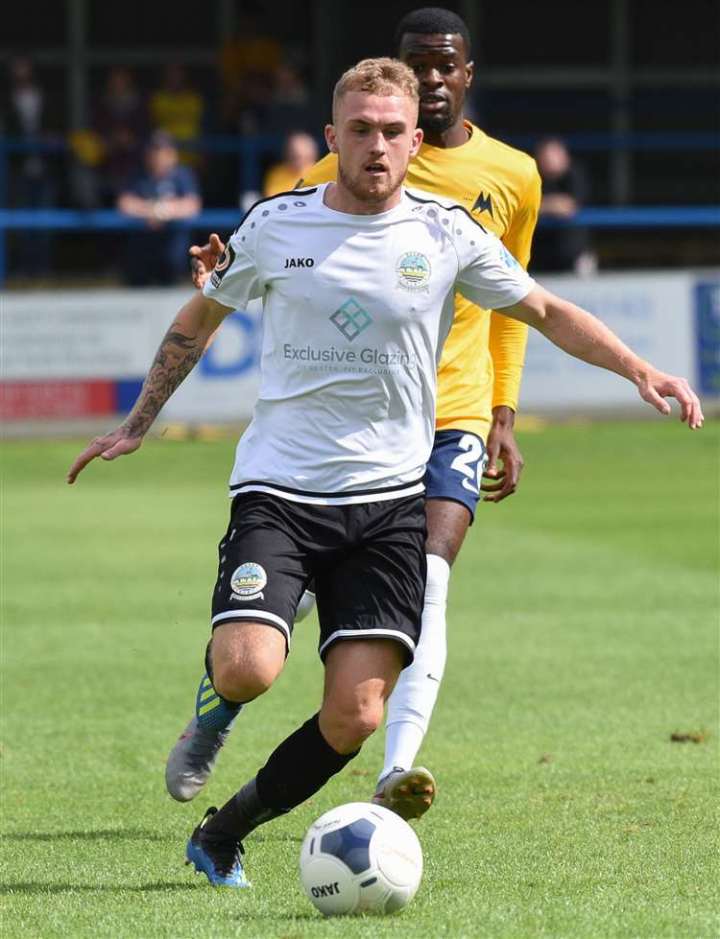 Two goals in three second-half minutes condemned Dover to their second home defeat of the season at Crabble on Saturday.

Whites, bidding for a third straight National League win, were undone by two headed goals as the visitors turned the contest on its head.

Torquay skipper Asa Hall broke the deadlock powering home a corner from Jake Andrews who also provided the cross from which Jamie Reid doubled the lead moments later to give the Gulls their first away win of the campaign.

Inih Effiong did convert an 87th minute penalty after Hall had been sent off for handball but it was too little too late.

To add to their woes Dover also lost full back Bobby Joe Taylor with an Achilles injury. 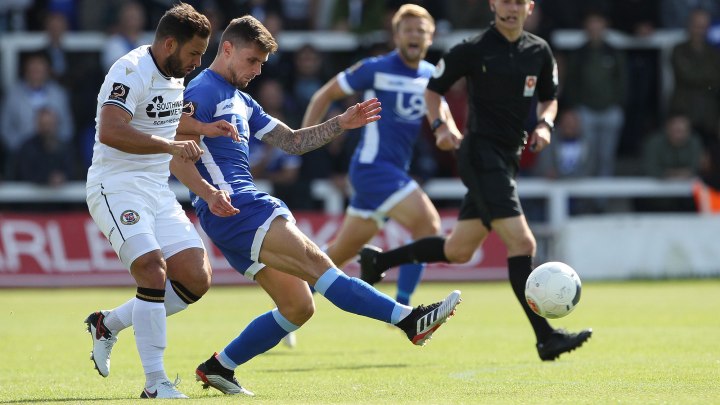 HARTLEPOOL UNITED’S players will be in for training on Sunday after they contrived to lose at Victoria Park to Bromley.

Pools lost 3-2 in front of their home fans, losing at Victoria Park for the second time this season.

And, with a clear week ahead before their next game at Chorley next weekend, Hignett will have his players in for a soul-searching session at the club’s training ground on Sunday.

The Ravens made a positive start to the game, with a chance falling to George Porter following a great pass from Reeco Hackett-Fairchild. He cut inside the box and shot, but he failed to get his shot on target and the ball only found the side netting. Bromley only had to wait a few minutes later to get on the scoresheet though, with Luke Coulson playing a through ball down to meet the run of Michael Cheek, who was able to calmly place the ball in the back of the net in a one-on-one situation with Ben Killip.

However, Bromley’s lead was short-lived after the Pools equalised moments later, with the Ravens failing to get the ball out of harm’s way, allowing Gavin Holohan time and space to be able to swing a foot at the ball six yards out with the ball taking a deflection, leaving Mark Cousins no chance to make a save.

Bromley scored again in the 27th minute when Luke Coulson’s corner wasn’t cleared, leaving Hackett-Fairchild the chance to shoot from close range to put the ball beyond Killip and into the net. Hartlepool bit back soon after Bromley’s close chance, equalising yet again when Gus Mafuta was afforded too much time and space, allowing him to dispatch a long-range effort which was placed in the bottom corner out of reach for Cousins. Hackett-Fairchild was able to restore the lead for the Ravens when Chris Bush played a diagonal ball into the box, where Kizzi prodded across the six-yard-box, catching out Killip, leaving Hackett-Fairchild with an open goal to slot the ball into.

Maidenhead continued their good start to the season with an emphatic victory over winless Chorley at York Road.

A third win of the campaign sees Alan Devonshire’s men climb to fifth while Chorley find themselves in the bottom two with just three points to their name since winning promotion back to the National League.

Young Maidenhead forward Josh Kelly opened the scoring in the 24th minute with a fierce strike but the visitors responded almost immediately through Marcus Carver’s neat turn and finish.

The hosts regained the lead in the 35th minute after Bernard Mensah was brought down in the box and the subsequent penalty was slotted home by Jake Cassidy.

Chorley had a great chance to draw level for a second time when they were awarded a penalty of their own after the break, but Courtney Meppen-Walter was denied by on-loan Fulham goalkeeper Taye Ashby-Hammond.

Chorley’s fate was sealed by Maidenhead substitute Danny Whitehall, who came off the bench in the 82nd minute and then struck twice in stoppage time, first with a header and then a cool one-on-one finish, to wrap up the win.

Solihull came from behind to beat Ebbsfleet and remain on top of the National League standings.

Myles Weston opened the scoring in the ninth minute when he cut across the Solihull defence and shot low into the corner.

Callum Howe was close to equalising in the 26th minute but fired straight into the body of Nathan Ashmore from close range.

Jamey Osborne did level for Moors in the 35th minute when he scored directly from a curling free-kick on the edge of the area.

Solihull hit the lead for the first time in the match in the 80th minute thanks to Jack King’s own goal, and that proved to be decisive.

A second victory of the week at Edgeley Park saw County, courtesy of second-half goals from Adam Thomas and Elliot Osborne, overcome Eastleigh to occupy a top-half position in the National League table.

The Hatters took to the field for their first-ever match with the ‘Spitfires’, showing an unchanged line-up in terms of personnel from that which had earned their first triumph of the season against Barrow four days earlier – albeit with a changed formation featuring a three-player defence. 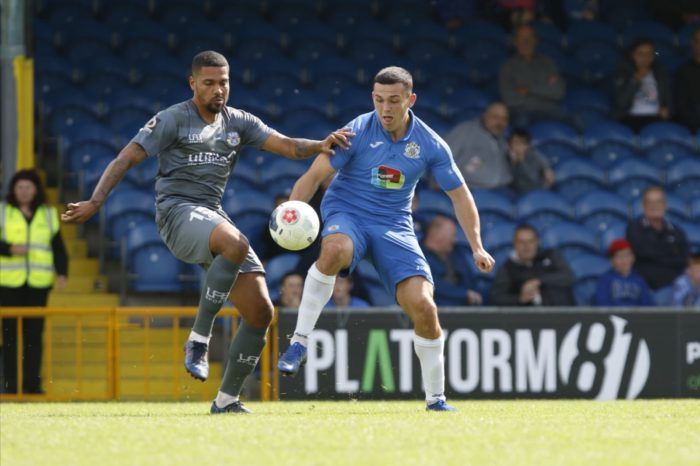 Eastleigh – beaten play-off semi-finalists in 2018/19, but without a goal on their travels during the new campaign – looked to freshen up their attack by bringing on much-travelled striker Tyrone Barnett, who, shortly after his introduction, saw a shot blocked by Hinchliffe. And Williamson headed tamely at County’s Number One from close range, after latching on to a long throw from the left by Jack Payne.

But with seven minutes remaining, the contest was effectively settled beyond doubt. Osborne unleashed his early contender for County’s goal of the season after picking up Dan Cowan’s throw and, from 25 yards out, swivelling to half-volley into the top-left corner of the net.

Scott Quigley scored the only goal of the game as Barrow made it back-to-back home wins with victory over Yeovil.

The winning goal came early in the second half when the striker controlled a long throw into the box, turned and fired the ball into the bottom corner.

John Rooney shot inches wide in the 20th minute and Dior Angus should have added a second for the home side but lifted his effort over the crossbar after 64 minutes. 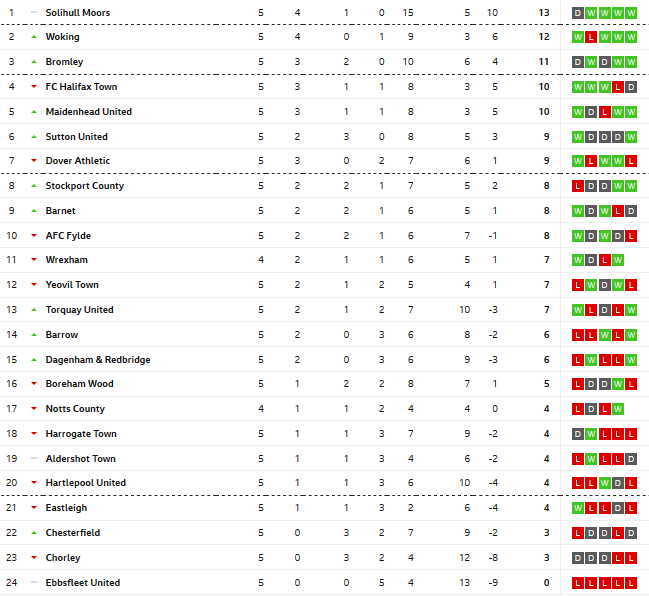