From the FC Halifax website, courtesy of Rob Brown: 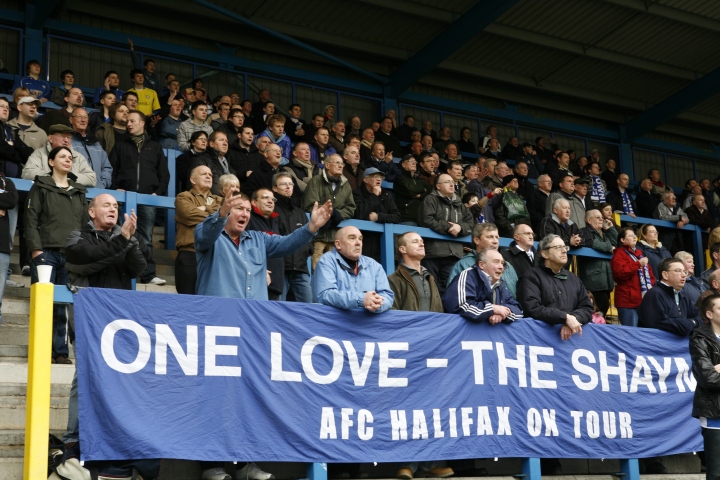 Aldershot’s Recreation Ground is one of our favourite places to watch football and their reprieve from relegation at the end of last season was very much welcome. The club operate a soft segregation policy which allowed the 70 or so travelling Shaymen the freedom to wander around the colourful ground. The main stand which was opened in 1932 houses a mixture of seats and terracing under a red and blue painted corrugated iron roof. A wooden stand on the other side of the pitch is equally interesting, opened in 1929 and houses long since abandoned turnstiles to the rear. Most of the home fans gathered behind the far goal on the terraces under a low barrel shaped asbestos roof at the park end. The travelling Shaymen were allocated seats in a small and much more modern stand behind the goal at the wooded high street end.

The first half had only just started when the Shaymen conceded a soft goal from a corner. There was less than a minute on the clock before the ball hit the back of the net right under our noses. The home team had the lion’s share of the possession throughout the opening half and could easily have had a commanding lead at half time.  Sam Johnson made one great save low down whilst on another occasion Aldershot looked to have scored again before the ball pinged back off the far post before it was cleared.

The second half started in similar fashion and there wasn’t much to cheer as Aldershot looked comfortable with their drum accompanying the home support in full voice. Most of the action was at the far end of the pitch with the backdrop of numerous trees just starting to lose their green summer colour. As the half wore on, the Shaymen began to come to life and created several chances generating plenty of noise from travelling support. The linesman was the centre of attention with around 15 minutes to go, surely the Shaymen had equalised?  It looked like the ball had crossed the line before being cleared as everyone was on their feet remonstrating.  Moments later it was all square though, a great header from the subsequent corner had us all celebrating. For the final 10 minutes it was all Halifax, if only the team had started the way they finished it would have been a very different afternoon.

Driving back and there was a sense of relief in the car. The tension and frustration had been building all afternoon after the poor start and it wasn’t a great game as both sides looked tired at times. In truth, much of the afternoon’s angst had disappeared with the late equaliser and subsequent rally. Things seemed much brighter as we considered the first five games as a whole and worked out that at the current ratio, we would end up with 90 points. It’s not been a bad start to be fair!

I’m glad you enjoyed the trip down and your fans overall were made welcome. Also pleased that the Rec is one of your favourite grounds to visit. It’s antiquated and behind the times, we know but it still holds much character.