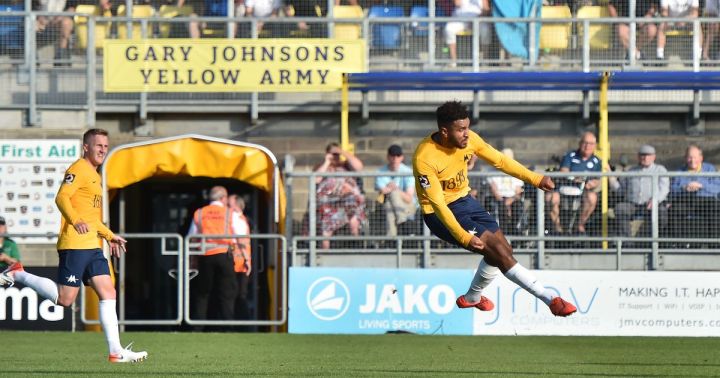 Pointless because we once again got nil point for our efforts. But in the sense of pointless meaning is it all really worth it, I would still like to paint a picture of optimism in what are fast becoming very dark times.

As I spoke to several local fans post-match, if you can only beat Aldershot two-nil, I would be seriously worried!

Thanks to Kurt from Teignmouth and the few who chatted with me as we waited for our cabs and the family fron Reading who got a cab before any of us!

I was going to write disparagingly about Torquay’s home support. I mean, you only heard them after their first and second goals and I was, in that first half, to remind them with “we forgot that you were here”.

It’s a weird set-up, with the home support banked on either side, but they got going once the game was won and they at least had a drummer in their ranks.

And let’s have it right, they would have scored a third (and perhaps more) had it not been for Kinsella’s magnificent headed clearance.

I bang on about our support I know but it really is loud and loyal but you wonder how long this is all going to last, given the current state of our team.

And 212 away fans? Somebody clearly can’t count can they?!

So let’s deal with the team again after this showing.

The worst thing about today was that the game was televised and so a whole bunch of other people can see just how poor we are.

It won’t be long before the majority of supporters will ask serious questions about Searle and that’s when the rot really sets in.

The players need a boss to look up to and to believe in. 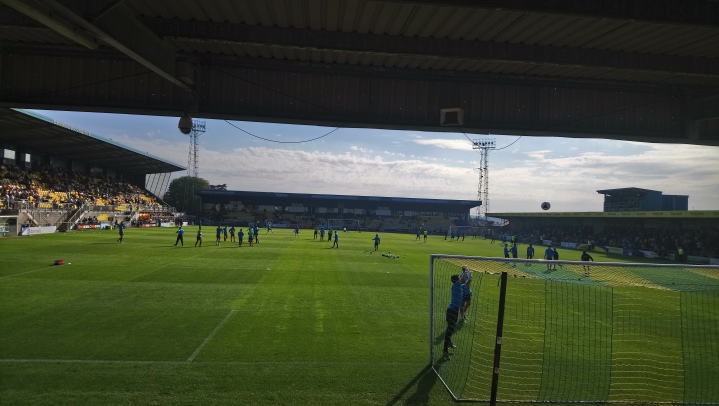 You tell me if there is really ANY substance apropos our style of play that is going to keep us in the National League.

Sideways, backwards, the long hopeful aerial punt into the box.

Week upon week we are fed the same food and I for one am fed up and hungry for something different.

I call things as I see them and not through rose-tinted glasses but I’m thinking most fans are now seeing the grim reality and how hard it is going to be to firstly keep ATFC in this fifth tier and more importantly continue to exist as a football league club.

Among the first to arrive at the Riviera Suite!

I draw an analogy with the current England cricket test team. They are deficient and mentally shot against the Australians BUT there are players with talent and while the game if cricket is far more complex than football, it’s true to say that you never know what is around the corner.

So a change of leadership? Right now I don’t think it would matter if we had a Championship coach down here. Our players, given one or two, simply do not look to be or are not up to the standard of this league.

And when you look at the home side’s performance today, how simple the football was, how easily they carved us open (second half particularly), why aren’t we able to do that? It really is eleven versus eleven.

And the fitness. I’m not questioning commitment because the players are running around with intent. It’s just that they look like headless chickens.

I don’t really want to single individuals out but I’m disappointed with Rance and Tinkler mostly.

Didn’t help losing Finney first half and u til that goal which was a sickening blow, we were kind of in the game until then.

But we were run ragged second half and the whole team looked tired and despondent.

Not only is the question how do we lift ourselves again for Monday (which will be the first home game I am to miss) but the preparation;  something needs to CHANGE Danny.

We are easy meat in a dead-end street. Our amazing fans deserve better. Drummer Elvis and the other diehards, me included, will sing their hearts out for the team and the cause but the patience is wearing thin.

Finally, to the Gulls fans a big thank you and best wishes for the rest of the season but to add, don’t get too carried away – I don’t think you’ll be pulling up any trees.

Also, a few fans today have been on Calling Ths Shots so that’s great as I haven’t handed the website business cards out yet.

I love you as always ATFC but Danny Searle – you have to do something different – and SOON.