00:30 – Woke up after posting on ShotsWeb hours earlier that today was in doubt due to a bug. The kind that keeps you in the bathroom. Pleased to say I feel a lot better and will likely stay awake from now. Are You Being Served? is on the radio as I write. It’s series 3 episode 6 and it’s wrongly listed on BCR as series 3 episode 3. It’s a classic episode where Grace Brothers have a German week. Sales are not going well. 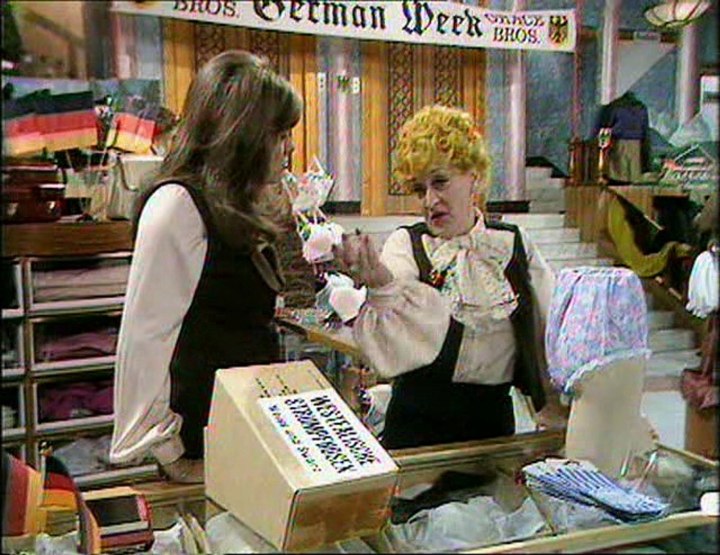 CAPTAIN PEACOCK: “Do I detect a feeling of anti Germans, Mrs. Slocombe?”

MRS. SLOCOMBE: “Yes. I won’t forget being flung flat on my back on Clapham Common by a landmine, And the German Air Force were responsible”

MR. LUCAS: “And all the other times she was flat on her back, the American Air Force were responsible”

0300:AM – Still getting hag off the Barnet forum. They’d tracked my post on ShotsWeb calling them an ‘orrible little club. You’d think they’d better things to do than worry about what I think. “We’ve never opened the stand behind the goal to away fans” Listen, you don’t have enough fans to open your home end let alone anything else. And at least we don’t play our home games in a soul-less cage.

06:45 – Just seen Timelord’s tweet. Virgin rail block online image editing sites as well as image hosts so no way of cropping a tweet for here. At least you can rely on their WiFi. Still dark at the moment.  Gonna settle down with some music soon. This train calls at Manchester finally and is my only change. 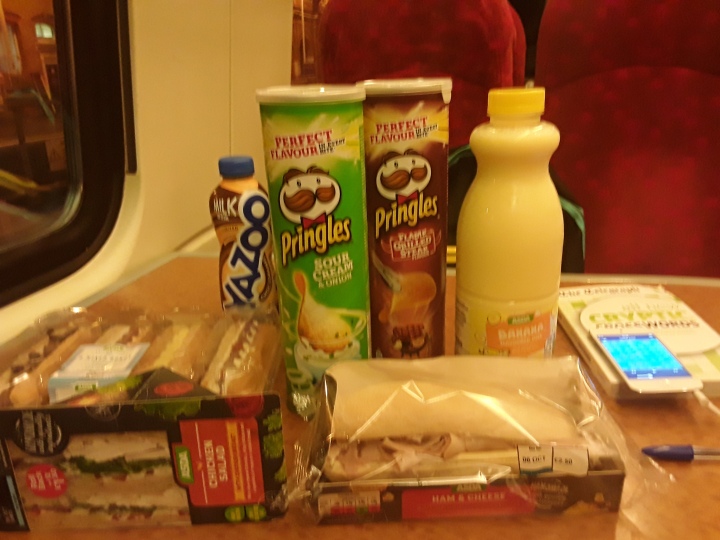 I can’t contemplate anything but returning home with three points today. I mean, if we get rolled over by these, can you imagine what the discussions will be like? Hopefully, Danny starts Mo but general expectations are he’ll be on the bench. Along with Shields and Mullings!

07:45 – Arrived at Basingstoke and the train has been sat here five minutes. Some early morning exchanges with fans on social media.  Charlie is enjoying married life and pleased that his new wife is still asleep.

J (shottripper) reckons the Drinking On Trains crew will yellow card me for not having any alcohol in my photo. But how does he know what’s in that PlayStation bag! Bob Dylan playing right now on the iPod Shuffle, Subterranean Homesick Blues… let’s hope it’s not Desolation Row for us later.

08:50AM – Been told to keep the noise down by Mr. Happy in the seats in front. I am talking too loud. He is trying to read apparently. I’ve been told this before, I’m used to it. I ought to have said “Don’t you have headphones?”

Three other fans got on at Reading, Will, Dan and Callum – they’ve started out from Farnborough. We’ve passed Oxford but somehow over three hours of this still to do before we roll into Manchester.

10:15 AM: Go Wild On The Cross Country! The awesome Bow Wow Wow song was just on the iPod.

We’ve spoken to a Coventry fan on his way to Rotherham, finished a very easy crossword in Will’s paper… The I… just pulling into… could be Wolverhampton… yes,.Wolverhampton.

THE REST OF THE JOURNEY

We pass a couple of football stadiums. Can you spot the Etihad in the distance?

Mr. Happy has left the building! We have a 30-minute wait at Manchester so grab a beer before getting a suburban train. The guard was a Fylde fan with a Scouse accent. We pass Bolton’s Reebok Stadium which looks a fine beast it has to be said.

I meet Rob Worrall. He says it’s incredible how our paths haven’t crossed all these years. He is right too and the reasons for that as some seasons when I hardly went at all and the factor of not going by the same public transport to away games. Top bloke and we chatted about the mic scenario last week at Chesterfield.

He thinks Calling The Shots is fab. And so do I of course but I tell him I only started it pre-season and considering it hasn’t been officially advertised online, nearing 5k vistors tells me that it is growing in popularity though people won’t always agree with my writing style or opinion – it isn’t about me, it’s about supporting this club through thick and thin and trying to offer a supported and united front with the fans.

Finally arrive  in Chorley before 1pm. The Bootleggers doesn’t open until then so a local gentleman (overall the people of Chorley were friendly and accomodating) recommends The White Bull pub around the corner.

In there it’s a good mix of home and away fans and I learn about a singer called Gerry Cinnamon.

Everyone knows about this singer and start singing away to this song. I don’t and feel like an alien, out of touch with modern pop music. I think this might be that song…

But then… out of the window I see our players trudging up George Street with their kitbags. I go outside, still holding my pint to ask where the team coach was, Shrug of shoulders. Came on the train apparently. This is what it’s come down to because, if we were part-timers I could accept that. But what kind of pre-match preperation, mental as well as physical, is that for our players?

This may be a misunderstanding on my part of current climes. It may be ‘the way of things’ nowadays but there does seem to be a lot of cost-cutting going on. Maybe it doesn’t adversely affect the players? But they certainly weren’t at the races yesterday as has been said by a ShotsWeb poster.

Turnstiles. One size fits all. In the club lounge there is beer that actually tastes like beer. An older home fan says “welcome to our shithole”. I tell him he should never say that because the people we met up until then had been warm and welcoming and that the ground had character.

It wasn’t all pretty. With no segregation, both home and away fans went where they wanted. During the first half, certainly before half time, one of ours was punched in the face and the offender arrested. Today helping police with their enquiries. I did not see the incident and writing on information provided by another fan and with their permission to print it here.

Towards the end of the game there were a few home fans just standing around glaring at a few of us. The stewards were there anyway and nothing materialised as soon as the final whistle went, those men went on their way.

A decent write-up from the Chorley Guradian now…

There have certainly been better goal-free draws than this one, which gave a thrills-starved crowd of 1,425 little to get excited about.

His opposite number Jamie Vermiglio was equally frank: “I’m frustrated, the players are frustrated – and I’m sure our fans are. We’ve had opportunities, two very good ones, to win this game and once again, for all the lads’ efforts, we’ve missed out on three points at home.”

Undeniably Chorley wasted the best two chances of a largely featureless match. Both came in the opening twenty minutes when the Magpies were at their sharpest.

Firstly, Ntumba Massanka broke through on the right and from the by-line clipped the ball back for Chris Holroyd – but the usually reliable finisher hesitated momentarily before unleashing a shot which a defender got across to block.

Then Holroyd and Massanka combined neatly to play in Matt Challoner to the right side of the box but the wing-back’s first-time drive flew just too high and clipped the crossbar. He should have done better.

That was basically as good as it got. Aldershot produced some nifty approach play at times but had to wait until a couple of minutes from the break before troubling Matt Urwin in the home goal.

Alefe Santos was sent clear down the right and raked the goalmouth with a fiercely driven cross-cum-shot before Harrison Panayiotou drew a routing save from Urwin with a low drive.

There was little action of note in the first 20 minutes after the interval, when Chorley seemed to lose their momentum.

Aldershot looked the livelier side without creating anything to seriously test Urwin. The Magpies barely mustered a threatening shot, confronted with a heavily-manned Shots’ defence, and the prospect of a decisive goal seemed to depend on the visitors’ quick breakaways.

Ethan Chislett made a determined run across the back of the Chorley penalty area, riding three challenges, only to fire over the bar, while Urwin had to be alert to make a near-post save, the last act of a thoroughly forgettable game.

But at least the Magpies climbed off the bottom of the table after Ebbsfleet’s defeat at Harrogate.

*Thanks to Heather for these images.

I thought it was a poor performance, really. From both teams. The ‘6’ on their side cleared anything and everything all afternoon. Second half there was a bit more life from both teams but when we did get into their box, tame shots at the keeper. Eastleigh winning at Chesterfield was especially galling as we all know we should have won there.

I expect the gate on Tuesday versus Dover will be 1500 or less. Can’t blame people staying at home in protest over these dire performances really.

It was a day of meeting some really nice people, namely James and Charlotte when we finally got on a southbound train from London Waterloo. They’d been to The Crystal Maze. James, an Everton fan, thought it was amazing that we travelled so far to support a National League team and the fact that we do this week in, week out. I say it is somewhere between loyalty and idiocy.

Charlotte has some red wine and once it is discovered that we all like Phil Collins, she is up and dancing around to Sussudio on her phone. I gave James a CTS business card and I hope they get to read this. At the game, good to meet Preston Shot and Aberdeen Shot too.

Prior to that, at Stoke-on-Trent, the train just stopped and we had to wait for a train to London Euston and then get through on the underground. At Manchester Piccadilly I managed to get a decent Angus Steakhouse meal at Burger King.

Thanks to Callum for helping me stay overnight but it was a good 45 minutes walk from Ash Vale to there in the rain without any taxis immediately available.

Got back eventually in time for the Southampton v Chelsea game. At Havant, the train I was on suffered brake failure so among hundreds of Chelsea fans I got on a train to Southampton. Plenty of beer they had but I was pleased to help out with the catering, handing out two unopened tubes of Pringles (glad to be rid of them actually) and with their U/23’s using our ground there is a positive connection between Chelsea and Aldershot anyway.

Such an eventful weekend and despite the disappointing result I really enjoyed it. My record has now slightly improved too. Eight games, two draws and six defeats. The wait for a Shots win before my own eyes rolls on until Tuesday.