AN EXTINCTION Rebellion protester from Farnham has been arrested while in London – for ‘occupying a gazebo outside Downing Street’.

Lorna Thomas, a member of Extinction Rebellion (XR) Farnham, was arrested on October 7 for setting up the structure in Whitehall.

One of eight XR protesters arrested under Section 11 of the Public Order Act for laying under the gazebo, she was met with high fives and cheers as she was “lifted out by my under arms”.

Lorna was arrested at 4.20pm, before being held at the site of the arrest for three hours, following “miscommunication” with the police van. 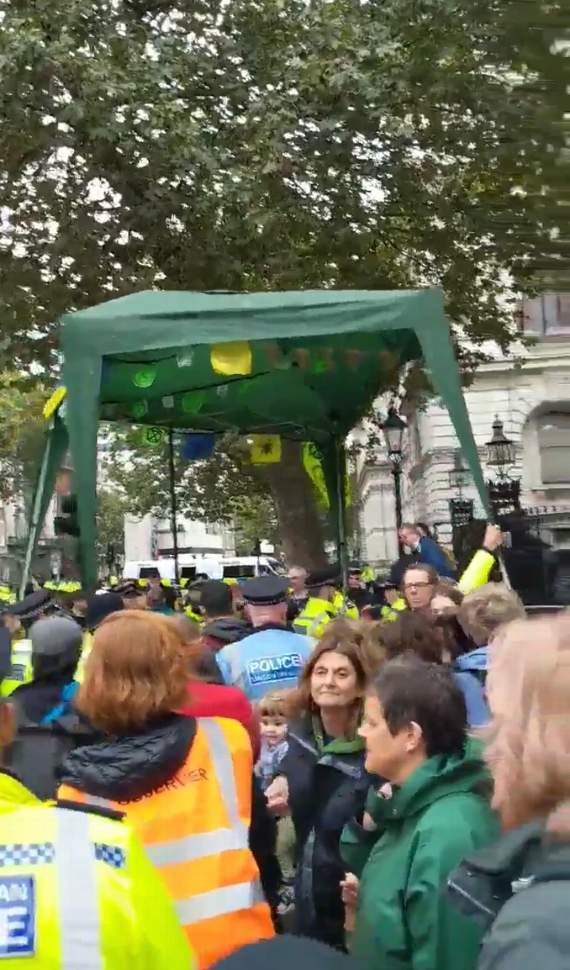 It is something that I have felt really despondent and depressed about, the state of the environment and climate change action.

Despite being held in custody until 4.30am on October 8, she added that she was “proud to have done that action” as there is “no more important cause in our lives”.

Lorna said: “It is something that I have felt really despondent and depressed about, the state of the environment and climate change action.”

In a further statement addressed at the Prime Minister, Lorna told Boris not to “patronise us” but rather to “do your duty as our leader” and “tell the truth for once and act now”.

More than 20 other Farnham residents joined XR activists from Godalming and Haslemere in Whitehall – including students from UCA, teachers and public servants.

The International Rebellion protests began on October 7, with hundreds of individuals stepping into the roads, blocking traffic and occupying areas of London such as Trafalgar Square and Westminster.

Jane Woodyer, a member of XR Farnham, said: “Putting yourself at risk of potential arrest, abuse from the general public and discomfort – sitting on a road in the rain is no picnic – is not an easy step to take. But local residents are doing it because they feel they don’t have another choice.”

She added: “Mass disruption is the only course of action that will make our government pay attention”.

A team of Extinction Rebellion Farmers from Hampshire also took to London – in a convoy led by a bright pink tractor. The group was set up “to promote the solutions that farming and land management can provide” when reducing greenhouse gas emissions and assist in building biodiversity.

The convoy set off from a farm in Winchester on Friday, October 4, before travelling via Odiham, Sandhurst and Ascot.

“The changes that are needed have to come from government, and we are taking radical and peaceful action to demand that the government acts,” said Dagan James, buffalo farmer.

“The science is clear, we are running out of time.

“We have no choice but to leave the farm and take to the streets to get our message heard.”