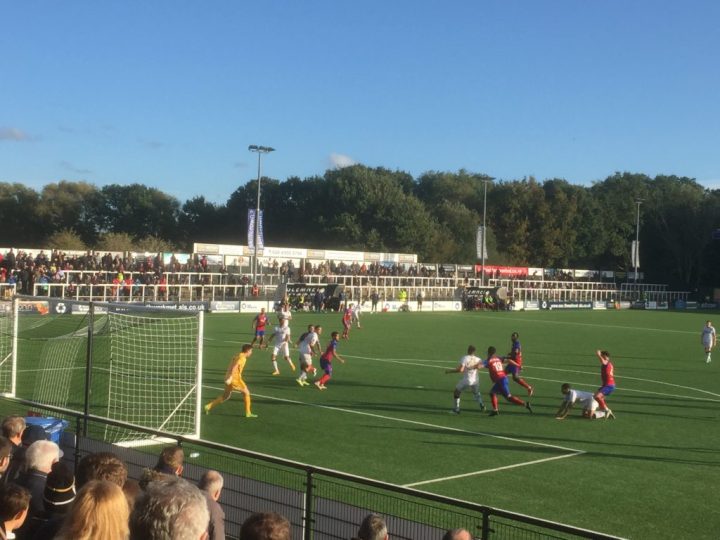 “I know it’s over and it never really began. But in my heart, it was so real”.

Morrissey’s words poignant tonight as all of us will be saddened by today’s result and possibly the performance; we know that it was a real Jekyll and Hyde show first and second halves. But this defeat and the manner of the goals conceded has reissued the debate on manager Danny Searle. I have to write impartially here and weave together a piece that will present as concise and fair so, first the match report (from Kent Online), Jake Williams’ vlog and then selected reaction from the forum and social media.

(With thanks to Timelord for photos!)

The Ravens got off to the perfect start when their early spell of pressure resulted in a goal after only 7 minutes as Luke Coulson’s free kick from the left wing was headed home at the far post by Joe Kizzi.

Bromley continued to press from there and Adam Mekki was just off target with a header following good work by Alfie Doughty. Mekki, clearly enjoying the Number ten role behind Michael Cheek, was back to his best, causing The Shots defence lots of problems and also drawing numerous free kicks which looked to be their main source of chances.

The Ravens went 2-0 on 12 minutes when a deep Frankie Raymond free kick was knocked down by Jack Holland for Cheek to turn the ball in from close range. Cheek went close soon after following great work by Kizzi down the right and the right back also was just off target with a shot across goal soon after.

Aldershot briefly rallied from there and pulled a goal back ten minutes later when a free kick wasn’t cleared properly and Mohammed Bettamer drove the ball into the corner of the net from the edge of the area. 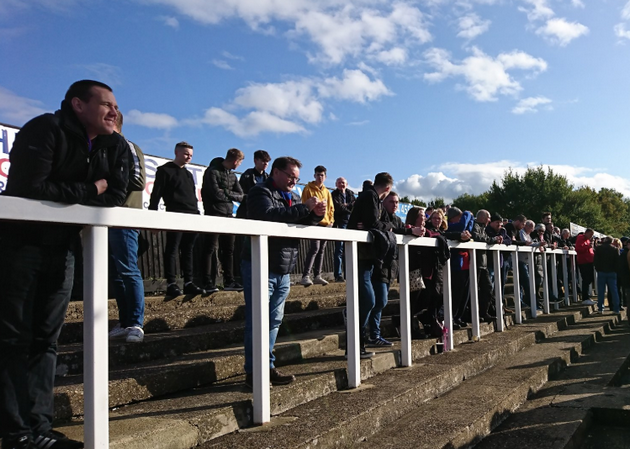 The Ravens continued to have the better of things though and their third goal came on 36 minutes when a free kick was only half cleared with a punch from Aldershot keeper Mitch Walker and following a goalmouth scramble the linesman spotted that Holland had headed the ball just over the line before the custodian scooped the ball away down at the foot of the post. Late in the half the visitors had a good spell, but the closest they came was when Alefe Santos fired over from range.

The second half saw Bromley start brightly, Josh Rees had a goal ruled out for offside and Mekki missed a good chance when clean through, firing wide of the goal when one on one. Aldershot moved to within a goal of Bromley just before the hour mark when former Raven Shamir Mullings found space on the edge of the box to fire the ball low into the far corner of the net from 20 yards out to make it 3-2.

The Ravens rallied again from there, Kizzi had a header from a corner blocked on the line by Max Hunt, but the pressure paid off on 68 minutes when Doughty hit a low cross from the left, which caught The Shots defence on the wrong foot and Cheek pounced to make it 4-2 with a cool finish from close range.

The game was not over yet though as Aldershot then had a good spell, Raymond was lucky to only see yellow after a terrible challenge on Ethan Chislett on the halfway line, which sparked a mass coming together before he and Mullings were booked.

Lewis Kinsella was just off target before The Shots made it 4-3 with 11 minutes to go, Kinsella crossing from the left for Robbie Tinkler to score with a header in the box finding a gap between the towering Bromley backline.

With five added minutes at the end of the game it could have been a nervy fifteen minutes for The Ravens, but in truth they held out comfortably with Adrian Clifton having a shot saved after more good work by Doughty out wide. Neil Smith’s side now await the draw on Monday before they prepare for another home game with Halifax Town next Saturday.

Now I think Jake has a future as a presenter, don’t you? Sky Sports awaits!

why anyone wants to give Danny more time is beyond me, halfway through October 17 games played only 5 wins. We are the joint 3rd lowest goalscorers in the league.
We have a manger who makes terrible decisions like continuing to give game time to absolutely awful players like JBA and KLF. He makes subs whenever and with no logic to the subs like against Yeovil it took till the 70th minute or so and 3-1 down for him to realise something needs to change.

Getting angry is what Danny needs to do

I don’t know how anyone who actually went to the game can blame Danny Searle for the defeat. He was badly let down by his players. The three goals we conceded from set-pieces were all down to our players not sticking with their man. Yes Danny is their coach but not sticking with the man you are marking is a fundamental mistake that football players at any level with any amount of coaching should not be making.

He can coach them but if they don’t perform, he can’t really take the blame.

Despite the result where both defences was shocking is still a defeat from another in a large collection of poor performances. Out of the cup before it’s even started. I think the time has come for the board to start getting serious now.

I didn’t go today but find it ludicrous that no changes were made after last weekend?Those players on the bench (Whittingham, Fowler, Finney, Shields) must be livid.

I’ve been saying for a while now it’s baffled me how Whittingham isn’t getting a look-in. And the sooner Finney is restored in our defence the better I think. As for the atrocious defending and the continual concession of needless free-kicks that’s been happening from the off, I’m sorry but the buck does stop with the manager. If players are ignoring instructions and losing their man when the ball comes into the box, why keep playing them? If I disobeyed orders in the workplace I’d soon be reprimanded, no?

Anyway, that’s a side salad debate that will roll on. In the meantime, remember four weeks back there was a poll on Danny Searle here? I trashed that post after the Dover win but feel this is an important time to resurrect it to see how the feeling is now on his future.

Armchair – he should stay

Taxi – he should go