The lights went out on Poole Town’s FA Cup quest for another year… and quite literally! The lights failed twice causing two delays of around fifteen to twenty minutes while someone phoned the Electricity Board.

But the first thing to say on what was an enjoyable night for me on my first visit to Black Gold stadium is that second half… didn’t the temperature drop! The most important thing to say was what a friendly club Poole Town is and their supporters absolutely brilliant on the night.

Comparisons to ATFC in that they have a drummer and the fans were really vocal for the first half an hour. After that it all seemed to stop and so I’d say it’s important to keep that vibe going; at Aldershot they never stop singing, even if a couple of goals down (which happens a lot!).

Talking of vibes, that is what you find at Black Gold, it’s a family affair, everyone knows each other and there’s just a feeling of happiness and positivity. A £12 entry fee at the gate, a couple of quid for a programme and being able to sit anywhere you want. The first steward I chatted to reckoned the gate could be as much as 500. Well it was double that, 1066 and as someone behind me quipped – “and we lost that as well”.

On match reports I usually combine press and my own thoughts into one piece but at the time of writing there are no match reports available online that I can see – even at 7am the morning after!

All I can remember is that Brooks got Town’s equaliser in the first half and that with six minutes of extra time, a time when I was well on my way up Tatnam Road, Town must have scored their second goal.

Anyway, watch here (at 01:08) the moment when the lights failed for a second time…

Of the game itself, it was disappointing because you could say that Hayes were marginally the better side and they certainly took their goals very well but the home side were patchy; some really good passages of play but periods when they seemed to lose focus and intensity and dare I say it, the Dolphins were often all at sea.

The prize is a big one for Hayes, home now to Oxford United in the first round proper but I would liked very much for Poole to have progressed. They sit fourth in NLS and as I said to home fans near me, Aldershot (and the way things are heading) could well be visiting next term and ought to have been this anyway if it wasn’t for our reprieve. 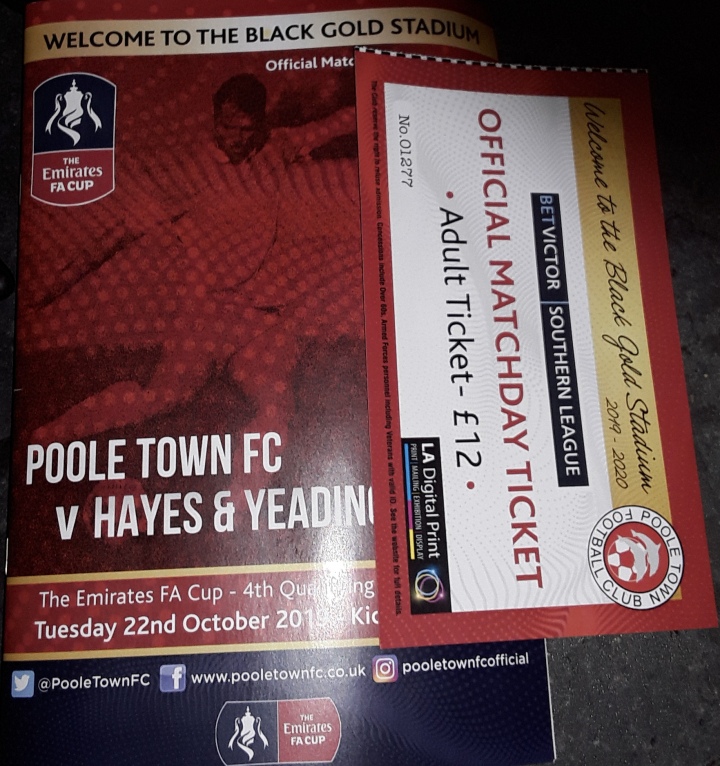 Facilities-wise, at Black Gold there’s no electronic scoreboard and no ball-persons to collect stray spheres. The toilets are bog-standard too, which means a hefty half-time queue although one suspects on a normal match day this wouldn’t be the case. For anyone really desperate I did notice this extra convenience…

If there are any official match reports online I will pencil them in later. In the meantime I’d like to thank Poole Town Football Club staff and its fans for making it a great atmosphere on a chilly night, the half-time chips and coffee were better and cheaper than a lot of National League grounds I could mention and as a fan living locally and having good friends who are Dolphins fans too, I’ll be sure to visit Black Gold again soon when I have a blank Saturday.

for the rest of the season!