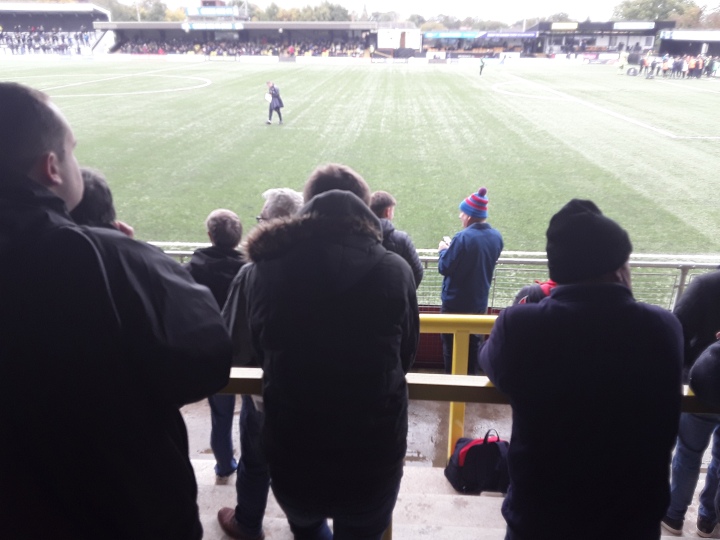 We didn’t deserve that. We really didn’t. Another set-piece conceded. Another goal conceded, worse than usual because we were left with little or no time to repair the damage.

That is why, as the song goes, the bitterest pill is hard to swallow. Sure, we probably wouldnt have scored if we had played until the midnight hour (another Jam reference and there are more come – see how many you can spot).

And we struggled to get our game together on the artificial surface. Harrogate were marginally the more adept team but had flattered to deceive all afternoon and with five minutes remaining and with Connor and Alfie replacing Mo and Ethan, even I was convinced we would be taking home a well-earned point. In the end, not many of us were saying that’s entertainment. 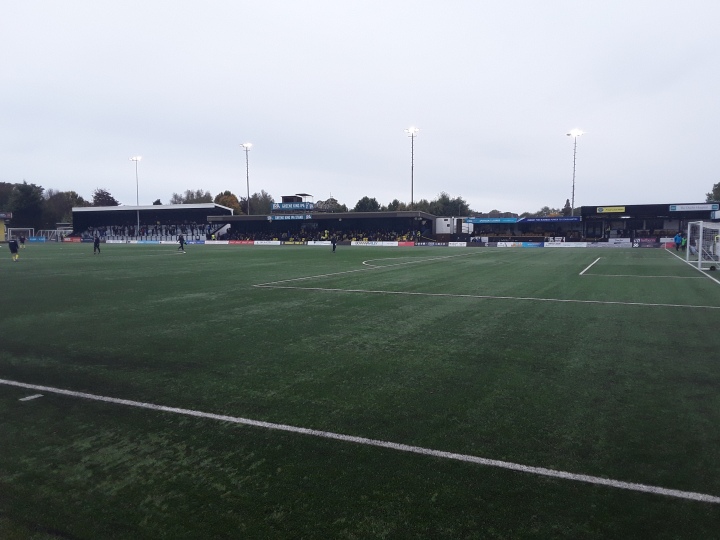 Jack Emmett scored his first Harrogate Town goal in almost a year to earn his side a late win at home to struggling Aldershot.

Simon Weaver’s side looked as if they were going to have to settle for just a point at the CNG Stadium having huffed and puffed for 90 minutes without much reward.

That was until George Thomson’s right-wing corner was met at the far post by Will Smith, the ball then dropping invitingly for substitute Emmett to smash home from seven yards out. 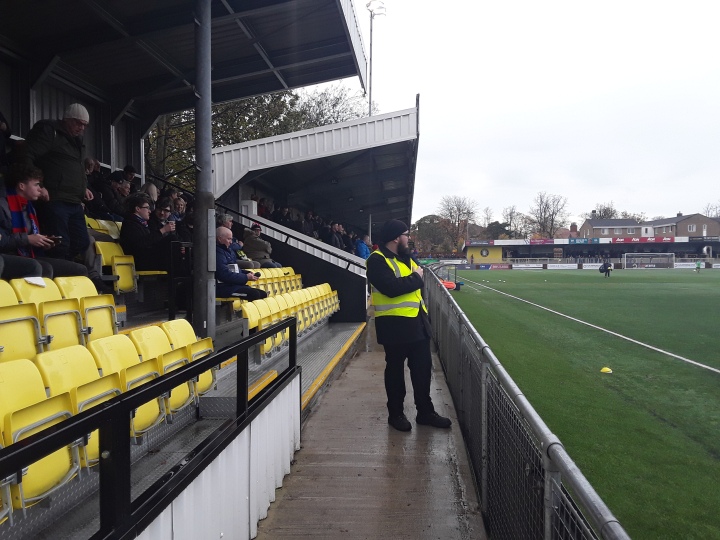 “It felt good, it looked like it was going to be a frustrating day, to be honest,” said Emmett, who last found the back of the net in a 4-2 away success at Boreham Wood on October 29, 2018.

“They shut us out quite well and we weren’t quite ticking, but I’ve got the chance at the end and I’m just glad I could put it away and not over the stand.

“What helped me was the defender coming forwards, so I just had to concentrate on getting their first and making contact before he got there. I’m just happy it went in.

“It’s been a while. I don’t score many but it’s nice to score one that matters. It’s good to get the three points.”

Now ahead of us there is a gap developing with Chesterfield and Fylde looking to pull clear while more worryingly behind us, Ebbsfleet are edging closer. I am expecting us to be back in the bottom four come Tuesday night. One thing is for certain, at the moment we do look like we’re going underground.

What are the forum and social media saying. I’ll tell you what some said on Twitter, of which I want to digest, analyse and react to and it was this: 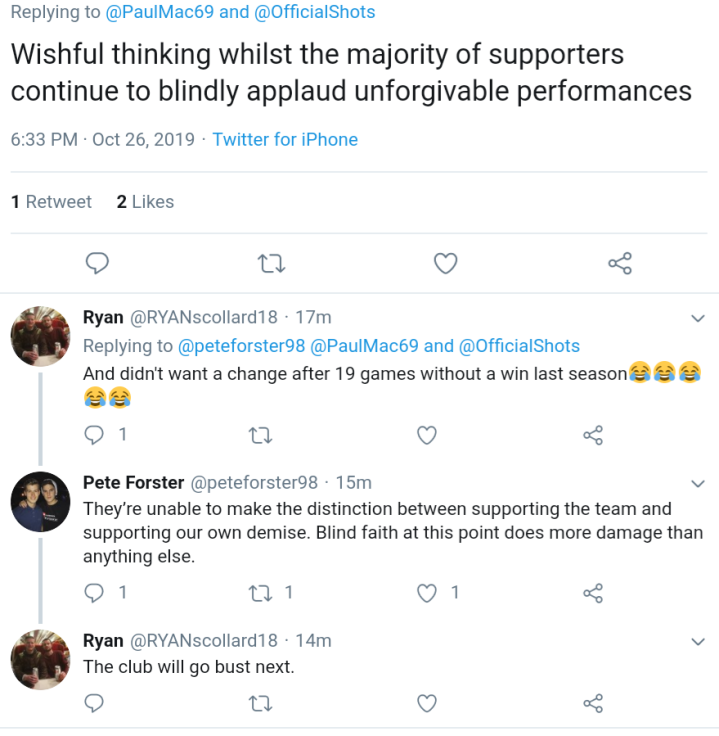 What I object to most is the reference of ‘blind faith’ and its inference that we cannot see what is happening while at games  (or perhaps that we don’t want to).  It’s an opinion I obviously don’t share as someone who is at most games and like others forks out a lot of money to see these performances (and occasionally non-performances!). Yesterday’s didn’t exactly set the house ablaze did it.

The example I will use is how Preston Shot (and he does it every game when the players come over at the end) and others and yesterday I joined in as well, totally applauded the players and the manager, our message being keep believing in yourselves, don’t give up, we will always be right behind you.

This is the blind faith I question. Because what else are we supposed to do? Sit at home (and then the club don’t even get our entrance fees)? Shout and scream obscenities at them? Even on Twitter when the players tweet post-match I am always reminding them that a better performance is around the corner, pointing out team errors or individual errors but most of all, planting little cerebral acorns – seeds of confidence.

Danny Searle looked absolutely sheepish just yards from us yesterday – embarrassed. The players looked crestfallen and miserable because of course, they had let us down. We were set up for a point and I will fall on my sword saying we deserved a point because there are not many around who agree!

But please, those saying that us diehards are damaging the club by keeping the faith, think a bit more outside the box. We have everything to gain by backing our players and coach and a lot more to lose if we don’t – the way I see it anyway.

Meanwhile, the Wellington Burger wasn’t on offer, nor the stew. It was a different catering operation from last year but the chicken and ham pie and chips I had at half-time were good. Not sure what happened to ATFC Martin second half but he says there’s no hangover this morning! He is our most vociferous fan and to be someone must be a wonderful thing!

Nice one by the lady Shots fan though when the lad totted up the bill on the calculator and asked for £8.40. “That isn’t right” she told him. So he admitted he was crap at using it and handed it to the girl. I was thinking, oh no, don’t say they’ve overcharged. Turned out it was double the amount. Well done for honesty – thought I’d give that a mention here.

Also, without our drummers, it wasn’t anywhere like the usual vocal volume or ferocity but I was pleased to see that we still had 150+ at Harrogate and a good mix of young and old too. As for the home support – embarrassing – about ten singers and you only heard them really when eventually their team scored.

Some of the defence played well. Left side were awful and they often got in behind us. Midfield ok ish. As for most of the last 2 years toothless up front. Yet again the opposition score from a set piece late in a half.. If DS thinks that was good we are really in trouble. Actually we are definitely in trouble again which is unforgivable. Time for a change before it is too late.

I was at the Match today and thought it felt like a good result for us was not getting beaten.. The defence did well today and seemed very focused, not giving away silly free kicks.. The disappointing thing as a supporter was the lack of drive from midfield and practically nothing to shout about coming forward at all, which is extremely frustrating from a Shots side.

Yes we lost again which is annoying and we do need to start winning and soon. Today was Harrogate a good team in 4th in the league and last week 4-3 to Bromley who are top and today thrashed 3rd placed Halifax 5-0 Two tough games and just the odd goal difference in each game. Think DS is getting there with his team, but need to get there quickly.

I was there today and don’t agree we were unlucky.The weakness on our left side was there all game.Kinsella never got close to their wide man and didn’t get much support either. Finney played well but we’d come setup for a point but second half they dominated taking over midfield We had several chances but they missed some sitters.Frustratingly they tried the same corner minutes earlier with their number 6 unmarked. We didn’t learn. I’m not a fan of Searle.His inexperience and tactical nativity is matched by his false optimism.We don’t have enough quality to stay up as it stands. The BoD need to act quickly which they didn’t last season.