A game I couldn’t get to because of the high winds disrupting the south western rail network (whole trees on the line as well as leaves) saw goals from substitutes Harrison Panayiotou and Alfy Whittingham hand Aldershot Town a much-needed three points against Berkshire village outfit Maidenhead United.

The visitors were so confident that they would win this one they brought almost their entire home support to the Recreation Ground with their words of “Aldershot get battered wherever they go” really working well for them.

Even their local rag couldn’t get much right, saying Eyoma not Whittingham got our second goal:

Well done to Scotty Lorimor and all those involved in the preparation of the remembrance celebration at the Rec today. 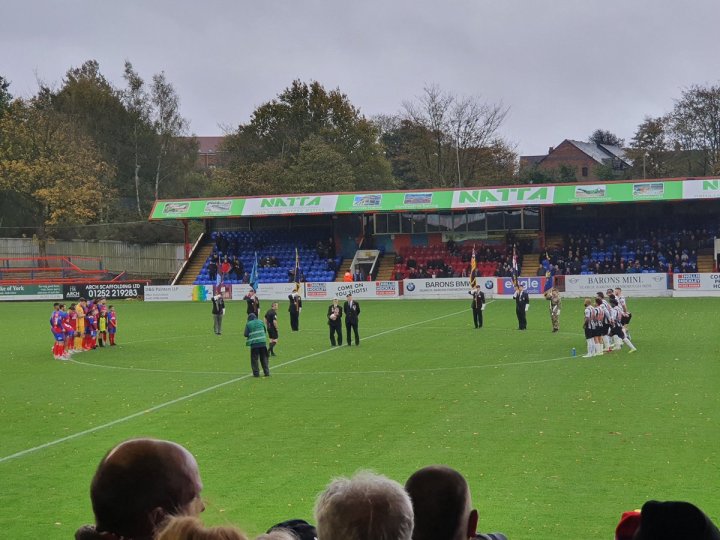 Town boss Danny Searle decided to opt for a 4-4-2 formation and make a couple of changes following the 0-0 draw with Boreham Wood on Tuesday. Alex Finney and Jacob Berkeley-Agyepong dropped out in favour of Ethan Chislett and Alefe Santos, who occupied the wide positions.

Shamir Mullings had a brilliant chance at the back post when Robbie Tinkler found him with a cross 34 minutes in but the striker failed to connect properly. The visitors then broke down the other end with great pace but Mitch Walker was there to prevent Danny Whitehall from opening the scoring. The visitors were denied a goal again a few minutes later when Kodi Lyons-Foster headed the ball off the line.

Another Tinkler cross almost inadvertently found its way into the goal but his deep cross could only graze the crossbar. And another chance fell to Mullings at the back post late in the half but he was unable to get enough purchase on his header under pressure.

“Hoping some football might break out soon. Absolutely dire.”

“No movement or strength and can’t finish. Doesn’t look bothered at all. I’d try some pace alongside Mo so JBA or Shields up top.”

“Awful 45 minutes of hoof ball from both teams… Hope I’m wrong but it seems to have Maidenhead nicking a 1-0 all over it.”

“Beware the late sucker punch from the visitors. Really need to score early second half.”

Early second-half substitute Panayiotou had the best chance in the opening 15 minutes of it. Chislett found a great ball through to him but he was unable to sort his feet out and get a shot away before the goalkeeper smothered it.

Dean Rance came close on the hour as he closed down a clearance from goalkeeper Chris Dunn, but the fortune favoured the visitors as the keeper claimed the deflected clearance.

However, three minutes later, Dunn wasn’t able to stop the Shots from taking the lead. Panayiotou flicked the ball on from the near post from a Jack Powell free kick the Maidenhead keeper was unable to hold onto the ball which bounced over the line.

Chislett came close to extending the lead in the 69th minute. He turned his man brilliantly out on the left flank before driving inside, but he saw his shot blocked from close in.

Panayiotou had another chance with five minutes to go when he was played through from the back but a combination of a Maidenhead defender and the goalkeeper Dunn were able to prevent the forward from doubling his tally for the day.

The Shots tally was eventually doubled in stoppage time through another substitute in the form of Whittingham. After, closing the ball down on the edge of the Maidenhead area the midfielder found himself in front of goal and made no mistake with a powerful finish.

“Harrison seemed up for it as soon as he came on and that appeared to ‘galvanise’ (used very loosely – it was better than the first half but still not great) the rest of them, particularly Shamir.”

“Yep we vastly improved when Panayiotou came on, he could have had a hat trick today and got behind them a number of times, done enough to merit a start in the next game, 2-0 and should have really been at least one more, Max was solid at the back Walker was hardly tested.”

“Pay me to stay away and we could still be champions.”

Well I think I have the best unwanted record, Shots having won for me ONCE in eleven games while winning FIVE TIMES in the nine games I haven’t gone to – we’d probably be top four if it wasn’t for me!

Still, a fantastic win today based on a better second half showing where the manager made substitutions earlier than of late which paid off. Results generally went for us today but not all as Wrexham won and a couple of teams below us have a game in hand. 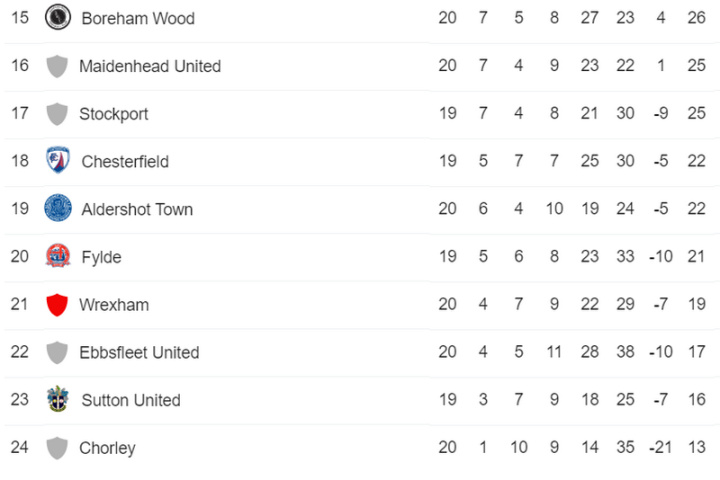 There’s a mini-break now until the trip to Dagenham and Redbridge and with the result today maybe a few extra coach seats booked and travel plans afoot for that game.

After the last Shots win, that 4-0 drubbing of Dover, performances and results went down the proverbial pan but a couple of scratchy clean sheets might suggest that we can do better following this victory? After all, Notts County and Chesterfield, visitors here soon, are scoring a few goals and our defence will need to be alert and steadfast.

Best quotes from ShotsWeb I saw today were these… talk about saving the best to last!

“I got an Amazon Echo Dot today. I just asked Alexa how Aldershot Town are getting on. Apparently we just lost to Bradford City in the FA Cup.” – MikeB