It really IS the proverbial six pointer. Our dismal away form has to improve any time soon and our lads have certainly turned things around since the debacle in Dagenham.

And look at them now! Since that win where we made them look like world-beaters, they’ve spiralled down the league and are below us and have parted ways with their manager.

A look at the table then shows both sides sitting above the trapdoor. The Racecourse isn’t a fortress and Wrexham are indifferent form-wise. Most fans on our forum are saying that coming away with a point would be a decent return. I can’t truly argue with that so long as it’s not another nil-nil!

It hasn’t been highlighted much that we have just about the best defence of the teams in the bottom half. We are still second lowest scorers and the attention has rightly been focused on that. It’s not pretty to watch but come the end of the season we might all be grateful for the grinding out of goal-less draws at Boreham Wood and Chorley – and we ought to have had another at Harrogate.

Their man-in-form at the moment is Omari Patrick. He is on loan from Bradford City and akin to Ethan Chislett he is a winger / forward.

WE’RE ON OUR WAY!

Managed to reserve seats there and back which hopefully will mean a table to put everything on. Due in Wrexham at mid-day and even if getting off at the General Station, it is a short walk into the town centre and a plethora of public houses where I can’t wait to get my paws around a pint of Jennings!

ALL YOU CAN EAT

GONE FOR A BURTON! 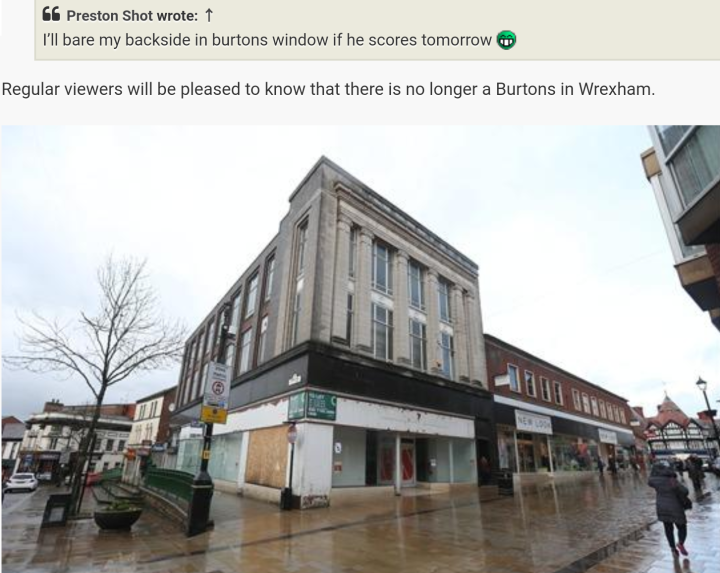 My jinx, had there been one, is done.  My first Shots away win this season happened in north Wales as the team produced a gritty and dominant display.  A goal conceded with almost the last kick of the game took the edge off things a little but I guess we are used to making things difficult for ourselves sometimes.

163 away fans (and that’s probably about right) sang their hearts out from start to finish and this morning I have hardly any voice at all. And unfortunately memories if this game are very sketchy due to a blinding headache second half.

Before the game I had to offload some of the refreshments, handing four bottles of Carlsberg Export to some Walsall fans on their way to Salford. Met up with other Shots fans on the train from Shrewsbury and walked into Wrexham town centre. In the Wetherspoons Ruddles was £1.59 I remember and there were bowls of chicken wings that appeared and appeared to belong to no-one in particular and I was invited to tuck in! The guy with the beard that wears the Bury shirt was there that we have seen at Chorley and Barrow.  I didn’t see Aberdeen Shot though on Twitter there is one fine photo of him at Chester station! I won’t publish that or Preston’s photo here at this time without their approval.

Then it was across the road to the Horse And Jockey where there was LowerBourneShot and the Postie and the fan from Solihull that I met in Ulverston prior to the Barrow game. Preston Shot and his daughters were there and suddenly it was 2.45pm so the short walk up to the Racecourse Ground.

On the train after the game, Rob Worrall told me that Henry had got the Shots match report out pretty sharpish and we digested other National League results which apart from Chesterfield winning, went our way. So I am using the Daily Post here, written by Rob Griffiths for you to read. Photos kindly provided by Hayley Jordan and, naturally, Timelord!

Wrexham’s plight took yet another step backwards as they went down to a first loss of 2020 in what was a listless and dour display against fellow strugglers Aldershot.

It is becoming a worrying trend of one step forward and one backward for the Dragons as any hint of New Year joy following a gritty win over Chorley ebbed away with a disappointing showing against the Shots.

Ethan Chislett fired the visitors into a second half lead with a stunning effort to beat Rob Lainton, before Mo Bettamer made amends for a horrendous earlier miss with a killer second for the Shots.

It could have been a bigger margin of defeat too as Chislett and Harrison Panayioutou conspired to see a third disallowed for the visitors while Bettamer will still be wondering how he failed to tap home from two yards out, Lainton also forced into a string of fine saves throughout. 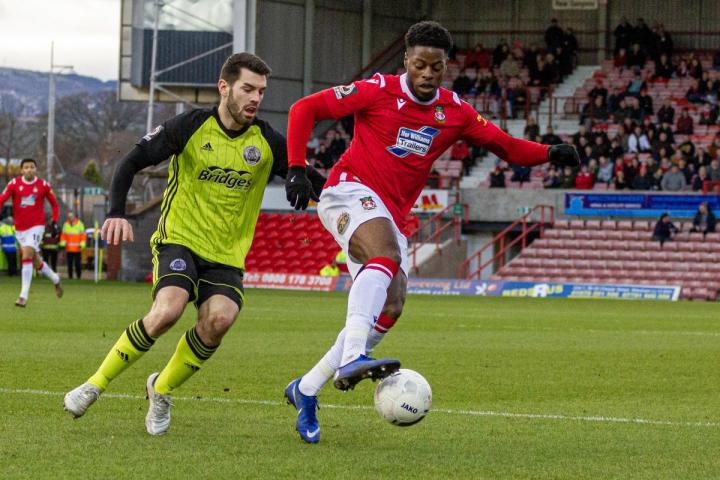 The biggest disappointment though for the Dragons was a lack of chances at the other end, Mitch Walker barely tested as the home side struggled to fashion any real foothold in attack, JJ Hooper’s late strike from Mark Harris’ cross proving to be nothing more than a consolation.

Manager Dean Keates made just the one change to his starting XI for the visit of fellow strugglers Aldershot, Paul Rutherford dropping to the bench to be replaced by Tyler Reid.

One thought on “Wrexham 1 Aldershot Town 2”