The relationship between music and football has evolved over the years, but it’s fair to say the twin pursuits have always shared some common ground.

Recently, we have seen the slow demise of the traditional FA Cup final song, in a move which has paralleled the decline of outlets like Top of the Pops on which to perform the music in question.

From a Shots perspective, we use Apache on the East Bank but haven’t, so far as I know, released an official single.

I’m not a fan of The Shadows or sixties music in general so even for sentimental reasons it wouldn’t maker the grade for this particular top ten.

Because there are the two animals: the official club song and the topical song, made by bands whose members supported a particular team (I think The Yobs for exame were Spurs fans but don’t quote me on that) and who would pen poignant lyrics about life on the terraces.

During the 70s and 80s boom time for footy songs, had we been in a higher echelon, perhaps we might have seen and heard such a thing.

Growing up, Reading were our chief rivals. Add Pompey and Bournemouth apropos Hampshire derbies. Woking was largely unheard of, just another concrete jungle up the road.

I looked at the Planet Football website and they’d got a list of 77 songs and Reading made an official release.

They Call Us the Royals

This sounds like the theme song for a new flavour of crisps, or the montage music from a film starring one of the lesser-known Disney Channel stars.

Now that IS embarrassing.

Put the Woking in the middle and burn the fucking lot

I’m sure there’s a tune there somewhere – maybe 50 Cent? Or back in the day Sham 69 or Cockney Rejects would have made a decent fist of it.

Or imagine Champione given the technno / trance treatment – that’d work.

If you look at the web music press, NME, Ranker and the like have all the usual suspects, Vindaloo, Three Lions, World In Motion… no mention of Half Man Half Biscuit any place.

Glenn and Chris singing Diamond Lights or Kevin Keegan’s “Head Over Heels In Love” are surely instant dismissals. As are things like Embrace with “World At Your Feet” – these are simply bog-standard.

There are tenuous works that almost make the cut that I’m quite fond of. Subbuteo gets a mention in The Undertones’ “My Perfect Cousin” and who knows why arguably the Wedding Presents’ best album was named George Best!

Others just failing to make the grade here are Collapsed Lung’s “Eat My Goal”,

Off the top of my head I could think of four absolute shoe-ins for a top ten football songs of an independent vein and I scoured the internet for the rest; and here they are.

It was 1990 and this appealed to me because at the time I was listening to the likes of Transglobal Underground and African Head Charge, 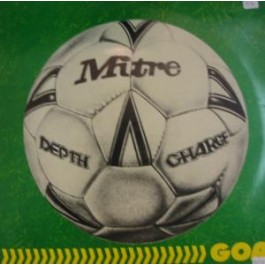 In any event, most of us like the hyperbole of overseas football commentary so this one cuts the mustard.

Peter Hooton wrote the lyrics in his early 20s after reading about the Christmas truce of 1914. The song was first recorded under the title “No Man’s Land” for a John Peel session in 1983. In 1990, Hooton wrote the chorus after Steve Grimes suggested putting the lyrics of No Man’s Land to the chord progression of  Pachelbel’s Canon. To shorten the song for radio, the producer Suggs cut the song to three verses from its original six. It has been used by numerous football teams since, as well as by the Labour Party for their 2017 general election campaign, often played during rallies.

Mark E Smith is a veteran of football songs, from ‘Kicker Conspiracy’ in 1983 to a World Cup song. His finest contribution has to be ‘Theme from Sparta FC’, still part of The Fall’s live set and the theme music to BBC’s Final Score.

If I hadn’t researched all of this properly then this treasure might have fallen by the wayside,  I was only playing Don’t Try This At Home the other day and this track is unskippable,  The Molineux nod and the sound of the crowd at the end put the icing on the cake here.

Mozza’s sad and heartfelt tribute to the Busby Babes deservedly wins a place. I think he could have titled it less directly but it’s straight and to the point and not a bad Morrissey number. Whether a Manchester United fan or not, in football we should always  remember and respect those men whose lives were curtailed.

Probably the first and only musical tribute to Nigel Clough! Irish band The Sultans of Ping shook the music world with all the vigour of a mild bout of indigestion when they strolled onto the scene in the early 1990s. They did leave behind a few decent tracks, including this ode to Cloughie Jnr. The track is available on the excellently titled album Casual Sex in the Cineplex!

Perhaps a surprise selection to a few but I’ve been thinking outside the box. “You’ll Never Walk Alone” at Anfield and in particular sung before a midweek European night game is poignant enough.

The song has been adopted by other clubs too, notably Celtic, but if you hear the song you predominately associate it with Liverpool FC,

As an apprecianado of African music, it’s unsurprising to me at least that this fits the bill. It’s a decent video (despite the poor pixel quality) and has the added spice of match commentary. was chosen as the official anthem for the 1998 FIFA World Cup held in France.

2. COCKNEY REJECTS – “War On The Terraces” 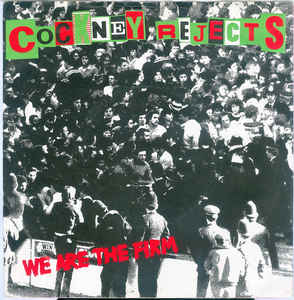 English punk rock band. Their 1980  song”Oi, Oi, Oi” was the inspiration for the name of the Oi! music genre. The band members are loyal supporters of West Ham United and pay tribute to the club with their hit cover version of of “I’m Forever Blowing Bubbles” –  a song traditionally sung by West Ham supporters. From a Youtube uploader:

Peel loved them, Morrisey loves them, Shane Mcgowan and Ricky Hatton loves them….the music press hated them, the West Ham loving Cockney Rejects. A volatile cocktail of stree punk, working class values and football mayhem, these young East End urchins felt they were taking Punk back from the Kings Road posuers and back to its grass roots. The Vdeo is a brief history of English hooligansim in the 80s and 90s, it contains some scenes people might find offensive but hey, this is the rejects…it weren’t ever gonna be pretty.

I’m not posting that video here. There’s enough glorification of football violence as it is. 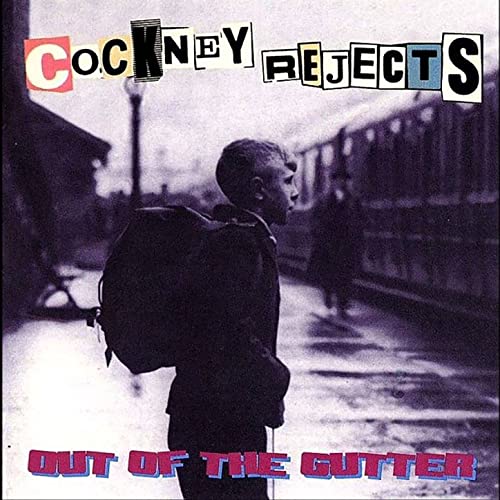 While putting this topic together I discovered that on their Out Of The Gutter LP they have a song called Calling The Shots! Maybe I should now adopt that for this blog as its anthem! My official video will now duly be reworked.

War On The Terraces is the flipside of the We Are The Firm single.

This was a favourite of John Peel. It’s always been my favourite footy song for it’s lyrics mostly, an honest resonance of a Saturday game in the eighties and a match made on the terraces. A Certain Ratio getting a mention is another plus point. The lyrics are dreadfully misrepresented online so I’ve endeavoured to correct them and print the majority of it here.

SERIOUS DRINKING – “Love On The Terraces”

Her name was Sharon,
She came from Southend
With sister Karen,
A little skinhead,
She liked football,
She liked snooker,
She liked A Certain Ratio,
She liked the Cockney Rejects!

At the stadium,
by the river,
Buying her programme,
And a silk scarf,
She had a nice face,
And blonde hair,
She wore a tracksuit,
She was beautiful!

It got to halftime,
The same as usual,
There was a brass band and a Norwich disco

The match got lively, another goal went in
another fight broke out
then I saw Sharon.

She’ll never walk alone
She nabbed my programme,
She broke my heart.

From a Guardian article:

Serious Drinking were my favourite of the Norwich bands. They took their name, they said, from Garry Bushell’s habit of ending interviews in Sounds magazine by popping to the pub with the band for some “serious drinking”. Their instrumental skills were rudimentary. They sang about drinking, about football culture, about country girls becoming punks, in the style of stupid stories told in pubs. Not for nothing was their debut album called The Revolution Starts at Closing Time.

There’s not a lot to say about the musicality of Love on the Terraces. This song will never be more than a footnote, and no one will write books about Serious Drinking in years to come. But listen to it and you’ll know this was a band having fun being in a band. And then wonder how many contemporary indie groups sound like they could play a party at your house without killing it.

Football related songs and good ones really are few and far between. I’ve achieved this by managing to eschew the quite excellent Anfield Rap too.