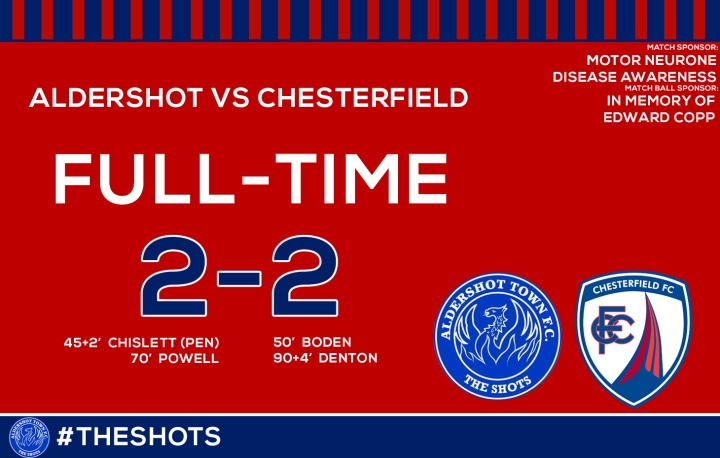 Recorded the first fifteen minutes of Saturday’s game. Near to Elvis (snare) and Scotty L (bass) a few rows down. What strikes me about this is the audio quality, considered it was from my coat pocket.

“Come On The Shots” is done like a 12″ remix and – almost a concert – brilliant stuff!

Play this through Cinemasound hifi and trust me, it’s like having The East Bank in your living room!

The Genesis song title perhaps sums up best what happened late on at the Rec yesterday afternoon. A few were questioning just where five minutes of extra time came from but many more accepted that it was probably about right, given Connor Shields lengthy substitution.

But you have to play up the whole period, not run the ball into the corner or let the opposition get a near perfect cross in, followed by a poor challenge defensively – even Mitch Walker might admit that he ought to have done better in keeping out Denton’s last-ditch equaliser. 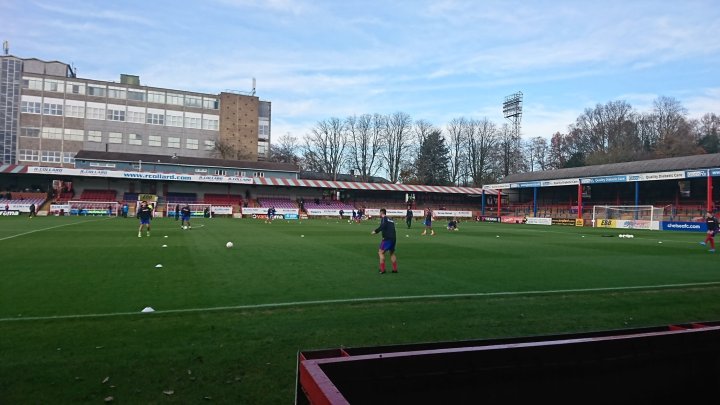 I thought that it was a difficult game to engage with. The Eastbankers were in fine voice again first half which is my usual home before I go to the South stand to sit with friends for the second half.

Danny Searle made two changes from Tuesday’s night’s game against Yeovil Town. James Rowe came into the side for the suspended Alfy Whittingham after picking up his 5th yellow card of the season midweek while Max Hunt dropped to the bench to be replaced by Robbie Tinkler. 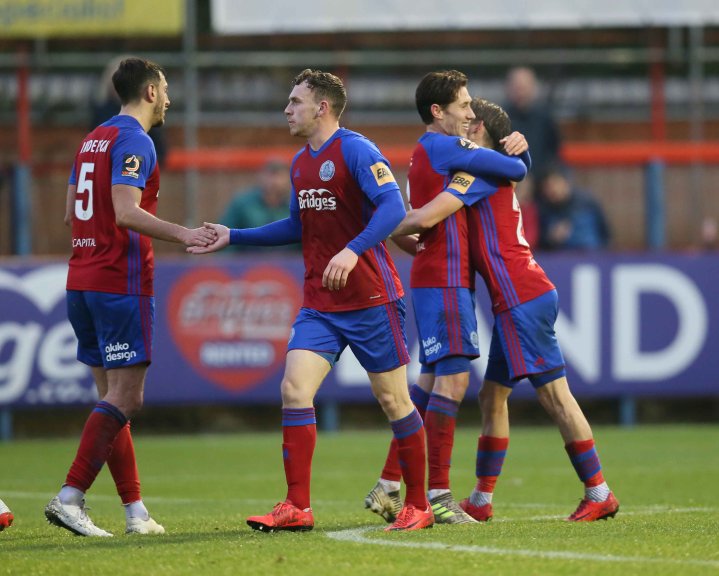 The Shots looked a bit laboured during the first period though possession was fine and it did seem that our pressure would finally tell, which it did just as the half ended, Ethan Chislett slotting home his second penalty in four days.

Captured this just after the penalty was scored:

Their first equaliser was poorly defended I thought, yet again from a set-piece as Gerrard’s headed flick from a corner found the head of Boden who directed the ball past Walker.

Our lead was later restored when  good work on the left-hand-side by Alefe Santos and Chislett meant that we retained possession before finding Jack Powell in the area and  he carressed it first time into the bottom corner with his left foot and while we had that momentum, a third goal would probably have sealed a win for us. 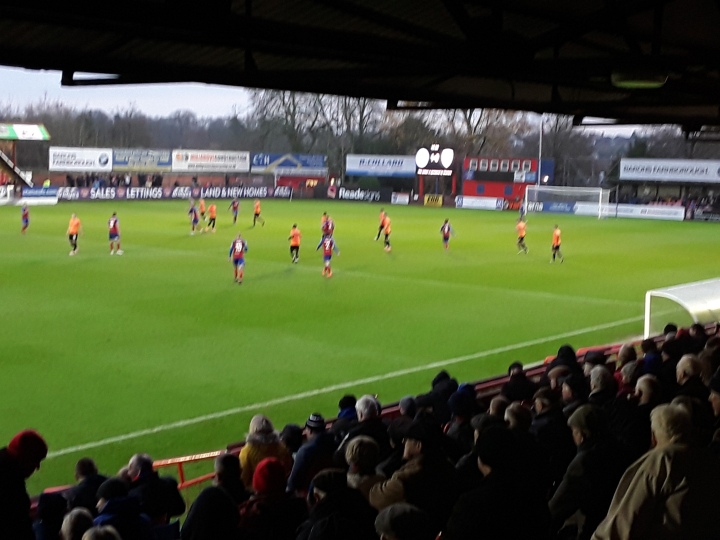 But of course it wasn’t to be and we’ve seen too many times three points suddenly recede to just one. I grant the visitors a share of the spoils myself. I chatted with some of the few away fans that did bother to travel down beforehand in both The Victoria and The Crimea and they were mostly saying that we would beat them.

Our own profligacy in front of goal, chiefly Mo Bettamer and a combination of lack of attention to detail at vital times and that irritating ploy of taking the ball to the corner flag and ultimately losing possession cost us big time.

So it’s perhaps more of an unconvincing three-match unbeaten run we are on. I am all booked up for Barrow next Saturday but we know that they are top of the table for a reason and not in any kind of false position. Surprise package that they are, I hope that we can surprise ourselves and them by winning but feel that a draw there, as Chorley managed recently, would perhaps feel more like a win.

What did you say?

Some reactions from fans forums…

The first half won’t live long in the memory… Good pen by Ethan. Thought we had the better of the second half after going ahead and just needed to keep it going. Definitely wasn’t the time to change formation!

Disgusted we went to the corner flag before the 5 minutes were even put up! Would have been nice to see Walker use his pace against Evans and the other lump!

Gerrard did play well – calm and compose throughout – winning most headers as Town dominated much of the first half and Aldershot’s penalty, a needless Maguire trip, was their first shot on target but for all our possession and build up we threatened very little. The new right back looked like a proper right back and every inch a league player and fingers crossed, should make us better.

The equaliser, Boden’s header, came early in the second half and the game suddenly turns in our favour. That was until Aldershot started to play the ball quicker and raised the tempo of the game. Even under pressure we held firm although giving the ball away easily and conceding needless free kicks in dangerous areas. They took the lead in this period. We had initially dealt with the danger in the bottom left hand corner but the ball broke free with Aldershot in possession and the pass seemed to hit the unfortunate Weston and deflected the ball to the edge of the box where the Shot’s man passed it in.

It looked likely we’d concede a third but didn’t as the home side spent the last five minutes, ten with extra time, taking the ball into the corner.
It was justice then when we equalised in the final minute. Sheridan played the ball down the left to Weston who had the option to pass back to him for a cross to come over. Bur credit to the much maligned Weston who won us the point. Instead of a return pass he deftly moved inside towards the goal and found himself in space for a shot. Instead he picked our Denton at the far post who nodded home for a richly deserved point. We didn’t deserve to win but we didn’t deserve to lose either.

I do wonder if Danny puts too much attention to the opposition instead of just making sure we are right. Returning to 4 at the back was clearly a tactical decision based on his views of Chesterfield’s setup. But today didn’t seem to work great, the midfield certainly struggled with Rance getting dragged back regularly. Rowe wasn’t ready to come back and he dropped Hunt, one of our best players in recent games.

To dip below 100 away fans on a Saturday tells its own story too. That hasn’t happened for a long time I don’t think.

I suspect the stupid ploy of taking the ball into the corner to “run down the clock” was DS’s idea, in which case he is not entitled to blame the team. It’s the dumbest way imaginable to try to hang on to a lead, and I am constantly amazed at the number of “professionals” (players, ex-players, coaches, managers) who think it’s a good idea. But then they seem to think short corners are a good idea too. 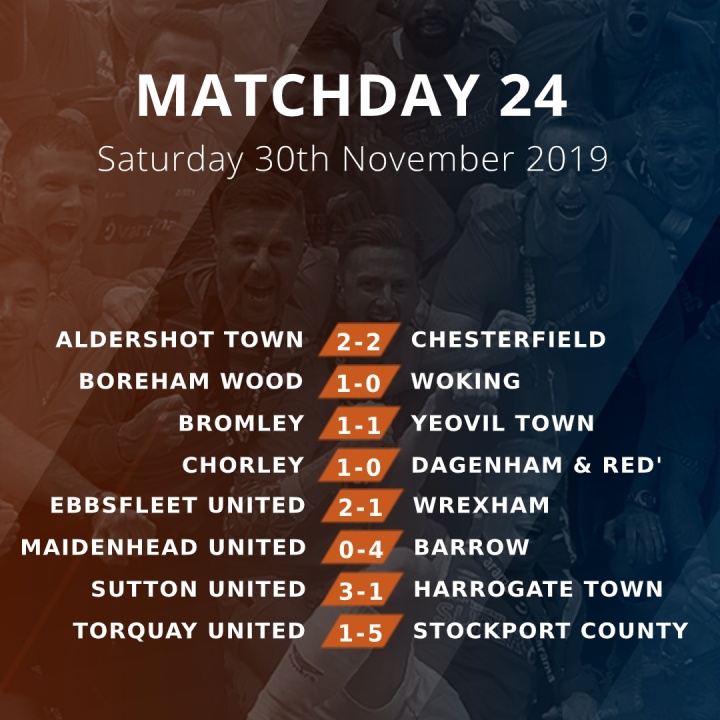